Putin meets with Tillerson in Russia as Syria rift deepens 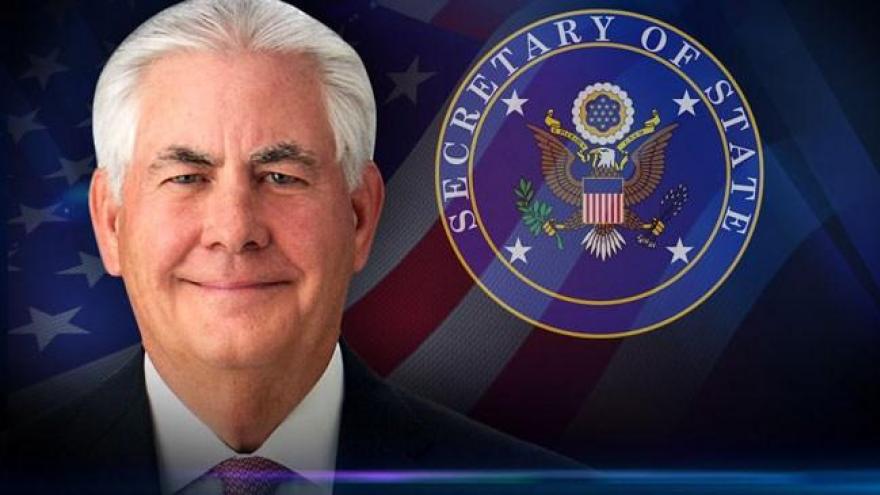 (CNN) -- US Secretary of State Rex Tillerson said Wednesday that relations with Moscow are at a low point after meetings in Russia that seemed to do little to bridge a deepening diplomatic divide over a chemical attack in Syria.

Relations are "at a&nbsp;low&nbsp;point, there is a&nbsp;low&nbsp;level of trust between our two countries," Tillerson said at a news conference with his Russian counterpart, Foreign Minister Sergey Lavrov.

Tillerson and Lavrov spoke to the press after meeting with Russian President Vladimir Putin in Moscow in an extended display of US-Russian disagreements over the chemical attack that left more than 80 dead; the role of Syrian President Bashar al-Assad in the country's future; US actions in the Middle East; and Russian involvement in the US election.

The unvarnished airing of differences made for one of the more bare-knuckled and blunt diplomatic encounters in recent years and points to a less accommodating and more confrontational approach to Russia than the Trump administration initially said it would embrace.

The US has tried to use the attack to try to drive a wedge between Moscow and Damascus, saying that Russia must choose between Syria -- and being on the wrong side of history -- or turn toward the international community in getting rid of Assad. Tillerson offered his Russian counterparts a bridge, tempering the open tensions by urging that Washington and Moscow find ways to cooperate.

Tillerson said that he and Lavrov discussed Assad at length and that he made clear that the Trump administration has come around to the view that the Syrian President cannot stay in power.

"Our view is that the reign of the Assad family is coming to an end and they have brought that on themselves with their conduct," the top US diplomat said.

Still, the two diplomats hinted that they could find common ground on this issue. Tillerson said that the US wouldn't dictate how Assad's departure takes place, saying, "We leave that to the process going forward," and added that it's important his departure "is done in an orderly way" and that it will "take a pace of its own."

Lavrov, meanwhile, said that Russia is "not staking everything on a personality ... we are simply insisting that everybody sits around the table and talks about it."

Lavrov also announced that Putin has agreed to reinstate a military "deconfliction" channel to ensure there are no unintended clashes in the skies above Syria. And Tillerson said that the two sides had agreed to establish a working group that would address smaller frictions and aim to make progress on larger differences.

The news conference came after Lavrov issued a warning to Tillerson Wednesday against any further US strikes on the Syrian regime. Russia is Syria's most powerful ally.

The two top diplomats had sat down together earlier in the day to work through the fallout of last week's chemical attack in northwestern Syria, which plunged the old Cold War enemies to a new low.

Russia has rejected the US conclusion that Damascus was responsible for last week's chemical attack, which killed 89 people and prompted the US to carry out its first strike against the Syrian regime in the six-year conflict, taking out aircraft and infrastructure at a Syrian military air base.

"The facts we have are conclusive" that the attack was planned and carried by Syrian government forces, Tillerson said, adding that the US was "quite confident of that" and describing it as "just the latest in a series of uses of chemical weapons by the Assad regime."

Lavrov countered, "It is perfectly obvious the subject is one we diverge on." He floated an alternate theory that "some of these stockpiles are being controlled by extremists," and added, "Russia is insisting on an objective investigation" and will protest if it does not take place.

The White House on Tuesday accused Russia and Syria of carrying out a confusion campaign over who was responsible for the chemical attack.

Less than an hour after their news conference, Russia vetoed a UN resolution that would have required Syria to cooperate with investigators and face full accountability after the brutal chemical weapons attack in that country.

When asked about Russian interference in the US election, Tillerson said that Russia's responsibility "is fairly well established." That set off Lavrov, who hadn't been asked for his thoughts but piped up to say that "not a single fact has been confirmed. Who saw the fact? We don't know. No one has shown us anything."

The Russian repeatedly raised the issue of US interference in other countries, pointing to the fallout after the Iraq War and the 2011 US intervention in Libya as he warned against the US taking action in Syria.

"This insistence on removing or ousting a totalitarian leader, we've already been through it, we know very well what happens when you do that," Lavrov said. "I don't know of any place of a dictator being removed smoothly without violence."

The Russians were clearly steeling themselves for a tough visit. Putin said in an interview with state-run MIR television earlier Wednesday that relations with the US had deteriorated.

"The working level of confidence in Russian-American relations, especially at the military level, under the administration of Donald Trump, has not improved, but rather worsened."

Tillerson and Putin are no strangers -- Putin in 2013 awarded the Order of Friendship to Tillerson when he was CEO of ExxonMobil, the highest honor Russia gives to foreigners.

Despite that history, Lavrov gave Tillerson an icy welcome Wednesday, diving straight into Moscow's grievances with Washington in what would usually be warm opening remarks.

Russia "saw some very troubling actions regarding the attack on Syria," he said, according to an official Russian interpreter. Following the chemical attack, US President Donald Trump ordered a Tomahawk missile strike against Syria's Shayrat airfield, from which the US says the aircraft launch the attack.

"We believe it is fundamentally important not to let these actions happen again," Lavrov said.

He hit back at remarks Tillerson made a day earlier that Russia would have to decide whether it was with the US and the West in standing up against Assad, or against them, describing the comments as "wrong choices."

Tillerson took a more diplomatic tone in his opening remarks, saying that he hoped to clarify "areas of common objectives, areas of common interests, even when our tactical approaches may be different."

"And to further clarify areas of sharp difference, so we can better understand why these differences exist and what the prospects for narrowing those differences may be."

It was a hostile start to the long-awaited meeting, which began with the two men entering a conference room making very little eye contact, and made for a marked contrast to the hopes Trump has expressed of improved relations with Moscow.

Lavrov also complained about the mixed messages coming out of Washington about the Trump administration's Syria policy: "I will be frank that we had a lot of questions regarding a lot of very ambiguous as well as contradictory ideas on a whole plethora of bilateral and international agenda coming from Washington."

Indeed, the White House has also caused a great deal of confusion -- the US position on Syria is still unclear, as Trump has made no comprehensive statement on Syria since last week's missile attack. He has made some comments to Fox News on Syria, saying he did not plan for the US to be drawn fully into the Syrian war.

White House press secretary Sean Spicer has said that the Trump administration would respond if the Assad regime used barrel bombs against his own people, something that has been a regular occurrence in the six-year civil war. Aides later clarified that this "did not signal a change in administration policy."

US Defense Secretary James Mattis has said that while defeating ISIS was first priority, further use of chemical weapons by the Assad regime would not be tolerated and could warrant additional military action.

"If they use chemical weapons, they are going to pay a very, very stiff price," Mattis told reporters during his first Pentagon briefing as secretary.