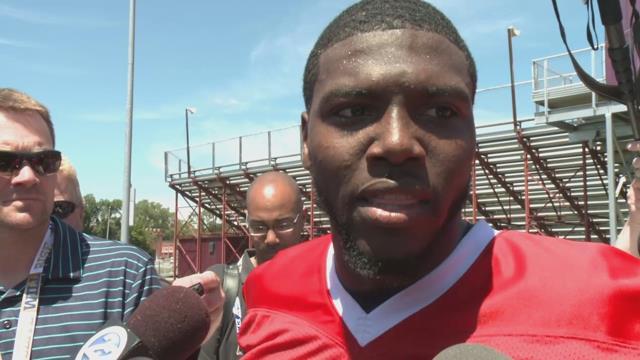 The University of Notre Dame football team is holding its training camp at the Culver Academies in Culver Indiana. One of the rising stars this year is quarterback Malik Zaire.

Zaire says being number one is not as simple as it seems when you play for the Fighting Irish.

"Being a Notre Dame quarterback, there's never a clear cut anything," said Zaire.

The only thing clear so far in training camp after the first day is Zaire believes he's ready to lead this team.

"You never know who's going to be the guy the next day so I think that is in the back of my mind. Staying competitive and pushing each of the guys in the red army as well as myself to get better," said Zaire.

"You can see for the first day, there's not a lot of sloppiness in terms of false starts and things of that nature. He's got a good command, good presence," Coach Kelly said.

Presence and command he'll need as training camp plays out under a hot August sun.

Overcoming the heat is all about getting his mind right for it.

"Being in the grind there's days when there's going to be hard to get up. But I think it's those days that we really need to kick in gear and stay mental," Zaire said.

Camp at Culver is also a big bonding trip for the offense. Wide receiver Chris Brown says they're all pretty close.

"Our guys are so close outside of practice and everything guys hang out we go to the movies, just simple stuff but that really brings us together," Brown said.

Players will be at camp at the Culver Academies through Tuesday.

On their down time, the players will get to go boating on Lake Maxinkuckee.