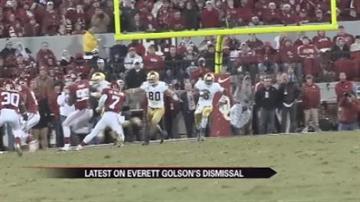 SOUTH BEND, Ind. -- Quarterback Everett Golson was expected to start for the University of Notre Dame in the 2013 season. But as of this weekend, he’s no longer enrolled at the university. ABC57 has been going through NCAA and university rules to try to make sense of it.

On the Notre Dame website, the university's academic honor code outlines various instances in which a student could be non-permanently dismissed.

We know from Everett Golson's statement, released Sunday afternoon, that he is "suspended" from the university for the fall 2013 semester due to "poor academic judgment."

Based on the academic honor code, poor academic judgment could qualify as consecutive semesters on academic probation or an offense much more severe - like cheating multiple times.

It is still unclear what exactly Golson's offense was, but we know that he plans to reapply to the university in the winter of 2014.

Even if Golson transfers to another school for the 2013-2014 season, he would be ineligible to play. NCAA rules require transfer students to sit out a season.