Race for the Cure: This year's Honorary Survivor 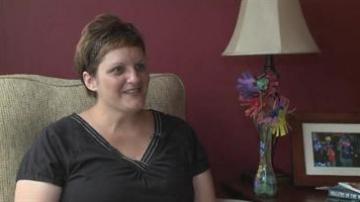 SOUTH BEND, Ind. – Everyone who runs, walks, or just cheers on the Susan G. Komen Race for the Cure has a story and a link to breast cancer.

Stacey Richez has participated in the pink parade every year, but this year’s race in Northern Indiana will be different.

Richez has been named the 2014 Honorary Breast Cancer Survivor.

She was diagnosed in February of 2013 and spent the remainder of last year fighting the disease one in eight women will be diagnosed with.

“I feel like this is my make-up summer, if you will, this is my time to really just enjoy each and every moment,” said Richez.

She is a mother, a wife, and now a survivor.

“I look back now and I realize from the moment of diagnosis I was a survivor because I had to survive the words, you have cancer,” said Richez.

Richez’s 2013 consisted of a lot of major decisions, including a lumpectomy.

Doctors found cancer in one of her lymph nodes so she completed eight rounds of chemotherapy and then radiation.

She ended the year with surgery, having her ovaries removed.

In January, doctors said Richez was 100 percent in remission.

She has the opportunity to “make-up” the summer she missed with her family last year. She’s kicking off the sunny season with Saturday’s Race for the Cure, but she’s ending it with a major milestone.

“I turn 40 at the end of this summer and I’m excited to turn 40,” said Richez. “I know for some people those milestone birthdays can be something that they’re not looking forward to, but I’m excited that I survived this and I get to celebrate another birthday,” said added.