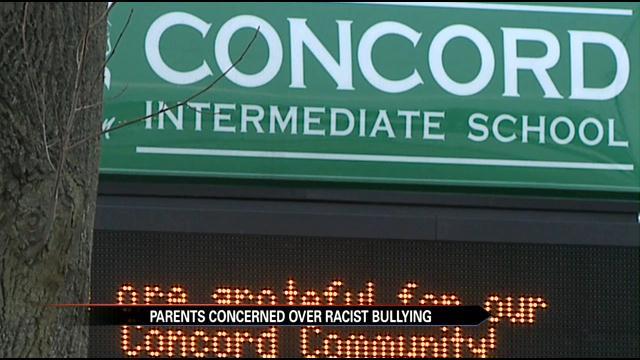 An Elkhart family is looking for answers because their daughter has been bullied at school, has received racial threats, but nothing has been done.

It has happened three times in the past two weeks.

Her parents are sick, feeling like their hands are tied.

Eugenia believes her daughter's school should be a bully free zone, but her daughter is telling her a different story.

“Last week on Monday, I got my first note and it said ‘Watch your back,'” said NyZeria.

“I was worried, very worried about the note, because nowadays people bring weapons to school,” said Eugenia.

Things only got worse after a second note came a week later, attacking her race.

She said she has an idea of who wrote the notes, because a girl once called her the “n-word” to her face.

So, she reported the notes to her teacher.

“The principal called me down to his office and he told me that I shouldn't worry, because they're just words and I felt like it was more than words, it was very offensive,” said NyZeria.

Her mom agrees; believing administrators could have done more.

“Be honest with you, it's never good enough,” said Eugenia.

ABC57 reached out to the principal and his office said they do not comment on internal matters.

It is the same thing they told Eugenia.

“They couldn't tell us what the consequences was for the little girl, the girl who called her the ‘n' word,” said Eugenia.

NyZeria's parents say as long as the author of those notes remains in school with their daughter they will not be satisfied.

“We just trying to get justice done for our child,” said Avonn Pratcher, NyZeria's father.

Justice they hope will heal some of the wounds their daughter still has.

“I just keep trying to talk to them to let them know that everyone is not like that,” said Eugenia.
Share this article: