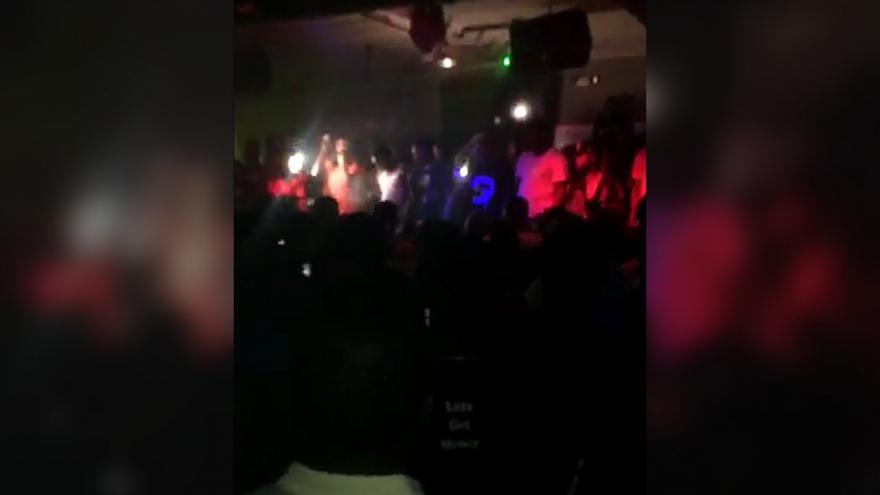 By Sheena Jones and Deanna Hackney

(CNN) -- Underground rapper Ricky Hampton, also known as Finese2Tymes, was arrested on an unrelated charge early Sunday -- one day after 28 people were injured when gunfire broke out at his performance in an Arkansas club.

US Marshal Cliff LaBarge initially had said Hampton was arrested on a charge of aggravated assault with a weapon in connection with the shooting at Power Ultra Lounge in Little Rock.

LaBarge later clarified that statement to say that Hampton was arrested on an unrelated gun charge out of Forrest City, Arkansas.

Several agencies including US Marshals, FBI and ATF were involved in the arrest, which occurred outside of a nightclub in Birmingham, Alabama, said LaBarge.

It is unclear if the rapper will be extradited to Arkansas.

Of the injured in the Power Ultra Lounge shooting, all but three had gunshot wounds, and the others suffered related injuries. Two people are listed in critical condition, Police Chief Kenton Buckner said Saturday afternoon, and the others had non-life-threatening injuries.

"We do not believe this was an act of terror," he said. "Some sort of dispute ensued."

College student Khalid Stewart said he was visiting the club when the shooting took place.

"It was during the performance and very unexpected," he said in a Twitter message to CNN. "After the first few shots everybody was laying down. It was more than just a few shots too...it had to be at least be 50 shots and I'm not exaggerating."

The Bureau of Alcohol, Tobacco, Firearms and Explosives will be assisting the Little Rock police with an investigation into the shooting, officials said.

"This activity downtown is going to cease," he said. "We're going to be extra-vigilant."

The club has two levels, with a restaurant on the first and a lounge on the second, according to a description on its Facebook page.

"Little Rock's crime problem appears to be intensifying. Every few days it seems a high-profile shooting dominates the news, culminating with this morning's event," Hutchinson said in a statement.

Chaos at the scene

"We are still gathering facts, but it is clear that we need to have a comprehensive enforcement strategy in place that helps take the violent threats off the streets."

Stewart said it was chaotic inside the club because people didn't know where the shots were coming from.

"People didn't know whether to run or stay down cause you couldn't see where he was. You could just hear the gunshots. As soon as you saw people trying to run you see them run right back in," he wrote.