Reconciler in chief: Obama appeals to the people on foreign visits 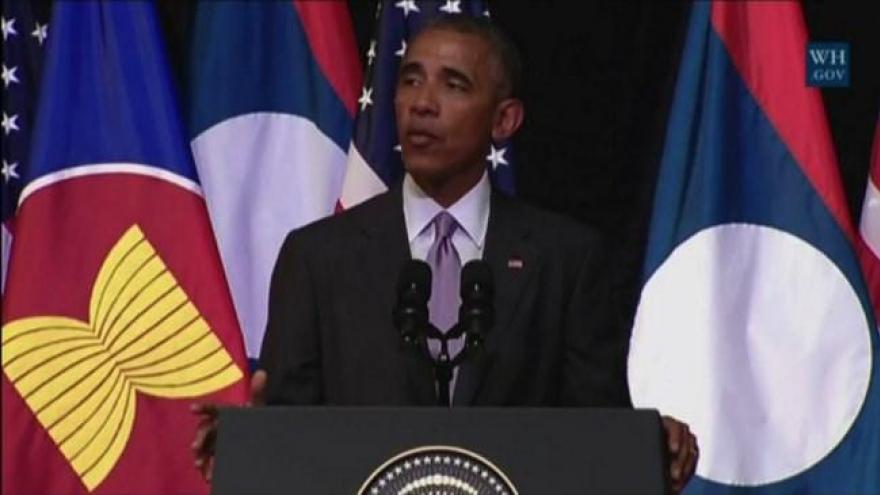 In eight years of trips overseas, President Barack Obama has sought to use the soaring, bridge-building rhetoric that rocketed him to the top of the political world in the United States on audiences overseas. He reaches past the leaders he meets at summits and state dinners to their people, trying to forge an emotional bond across barriers of language, ideology and culture.

The tradition continues when Obama addressed the Lao people Tuesday as he seeks to close a historical circle in a reclusive, Communist nation that was saturated by US bombing during a secret war linked the conflict in neighboring Vietnam.

"I realize that having a US president in Laos would have once been unimaginable," Obama said. "That conflict was another reminder that whatever the cause, whatever our intentions, war inflicts terrible toll, especially on innocent men, women and children. Today I stand with you in acknowledging the sacrifices on all sides of that conflict. From the anguish of war, there came an unlikely bond between our two peoples."

It was one of the last major foreign policy speeches of Obama's administration. He summed up the pivot to Asia that is at the center of his global agenda as a lasting shift and not a "passing fad."

"The United States is more deeply engaged across the Asia Pacific than we have been in decades," Obama said. "We've sent a clear message that as a Pacific nation we're here to stay."

Taken together, the carefully crafted speeches and town hall meetings that Obama has held overseas chart an oral history of his international vision and personal worldview.

All presidents use speechmaking as a tool of power -- especially those like John Kennedy and Ronald Reagan who appreciated the politics of the grand gesture. But Obama's attempts to engage foreign populations -- especially young ones -- have been especially overt, reflecting the political method of a president who as a former community organizer looks to build coalitions from the bottom up and who has been shaped by diverse ethnic and family heritage and an unusually peripatetic upbringing.

And while Obama's speechmaking may have become mundane through repetition at home, and his more aloof disposition with foreign leaders abroad have led to mostly distant relationships with his counterparts, his lofty turns of phrase can still move audiences who are seeing him for the first time and for whom he remains a hero.

"Your voice matters -- your ideals, your willingness to act on those ideals, your choices can make a difference," Obama told young people in South Africa in 2013.

Obama's speech in Laos, where Air Force One touched down on Monday making him the first US President to visit the country, will be a bookend to one he delivered in Tokyo right at the start of his presidency, where he first claimed a kinship to a region with which he was familiar as a child.

"I have never forgotten the warmth and the hospitality that the Japanese people showed a young American far from home," he said then.

In some instances, Obama is the first sitting US president to visit a country and address a nation, using the weighted symbols of a presidential trip to appeal to a country's pride.

In Myanmar in 2012, the President's motorcade drew hundreds of thousands of people onto the streets in an explosion of joy that made a remarkable contrast to the decades of junta dictatorship from which the nation was emerging.

Putting down a historical marker in Laos, Obama will spend time in the capital Vientiane and also travel to the ancient northern city of Luang Prabang to convene a town hall at Souphanouvong University.

Campuses are a well-worn setting for speaking directly to a nation's youth. Obama has also taken his case to the people in parliaments, in concert halls and convention centers, in countries ranging from Canada to Israel to Australia.

He didn't even wait to be president to stake out this oratorical approach to foreign policy, beginning with a speech in Berlin during the 2008 presidential race. That was also the start of an effort to leverage Obama's biography and historic potential as someone who breaks down racial barriers to woo populations estranged from the United States in the wake of the Iraq War.

"Tonight, I speak to you not as a candidate for president, but as a citizen -- a proud citizen of the United States, and a fellow citizen of the world," he said to 200,000 Germans at Berlin's Victory Monument.

Since then, Obama has frequently used iconic historical backdrops. He returned to Berlin's Brandenburg Gate, no longer a symbol of a city divided, for an address as president in 2013 -- though it only drew a fraction of the crowd he commanded five years before.

In Hiroshima, Japan, earlier this year, Obama stood below skies where the first atomic bomb burst and changed the face of warfare.

"The world was forever changed here, but today the children of this city will go through their day in peace," Obama said. "What a precious thing that is."

His speech at the site of the atomic bomb followed Obama's pattern of attempting to stitch up long festering wounds using his skills as an orator.

He told Cubans in Havana this spring it was "time to leave the past behind" during an address broadcast live on state television. In Myanmar, Obama told a crowd at the University of Yangon he had "come to keep my promise and extend the hand of friendship" after decades of estrangement. Trying to forge a new beginning with the Muslim world in 2009, Obama traveled to Al-Azhar University in Cairo, one of Sunni Islam's most prestigious seats of learning.

That speech built on the Berlin speech of the year before and the presumption that owing to his unique background, upbringing and global appeal, Obama was a different kind of US leader -- and would enact policies that reflected an internationalist outlook.

In his speech for the Muslim world, Obama mined his childhood to suggest in particular that he, unlike other US presidents, had a special appreciation and understanding for Islam.

"As a boy, I spent several years in Indonesia and heard the call of the azaan (to prayer) at the break of dawn and at the fall of dusk," Obama said in Cairo. He hoped the appeal would lead to renewed partnerships between Arab nations and the US, though the ensuing Arab Spring led to widespread instability.

Obama has repeatedly used his background and internationalism to ingratiate himself with his audiences and to advance his agenda.

He told the people of Japan that he was the first "Pacific President" in 2009, a nod not only to his childhood but to his vow to shift American foreign policy toward Asia.

In Jakarta a year later to highlight his Asia pivot policy, Obama won over the audience by recalling his boyhood in the sleepy capital, now unrecognizable in the gleaming tiger economy city it has become.

"We had a mango tree out front. And I learned to love Indonesia while flying kites and running along the paddy fields and catching dragonflies, buying satay and baso from the street vendors," he recounted.

And in Africa he claimed a blood kinship with the continent of his father's Kenyan ancestors.

"I stand before you as a proud American. I also stand before you as the son of an African," Obama told the African Union during a speech in Ethiopia last year, using his status as the first US president of African descent to call for reforms in the continent's corrupt capitals. "Africa and its people helped to shape America and allowed it to become the great nation that it is. And Africa and its people have helped shape who I am and how I see the world."

Sometimes Obama's reconciler-in-chief approach to discussing his own country while abroad has caused trouble.

In Strasbourg, France, in 2009, his comment that the Germans and French view their countries as just as exceptional as Americans view theirs angered his critics back home.

In his speech in Cairo, Obama's comment that the trauma of 9/11 had "in some cases ... led us to act contrary to our traditions and our ideals" helped fuel claims by his opponents that he had embarked on an apology tour to criticize his own country abroad.

And one lesson of his administration is that the interests of world powers and the depth of global crises are rarely swayed by the personal charms of a US president, no matter how worldly they may be.

And as in the domestic arena, Obama has sometimes been criticized for not following up a big speech with the unglamorous work of implementing policy.

But even if he doesn't always win policy changes and political plaudits, he often earns goodwill and laughter -- occasionally at his customary, and sometimes mangled, attempts to close his speech with a remark in the local lingo.

It's a way of cutting through the formality of a prepared speech and connecting with an audience.

"Mingalaba!" he proclaimed, using a local greeting in Myanmar to the delight of the audience during his 2012 stop.

In Canberra, he told his audience he had been practicing "strine" -- the Australian accented form of English -- quickly getting the crowd on his side.

And in South Africa, he attempted not just one but multiple greetings in local languages, proclaiming he'd been practicing.

"How-zit?" he inquired, using the Afrikaans slang word for hello.