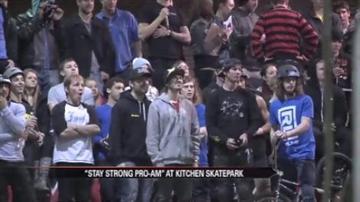 SOUTH BEND, Ind -- All the hotels in South Bend are full because BMX riders took over the town this weekend at the Kitchen Skate Parks’ Stay Strong Competition.

Last years’ X Games winner, Scotty Cranmer and Pro BMX riders from around the world gather to compete at the Kitchen Skate Park in South Bend in hopes of winning that $6,000 pro purse, but with over fifty riders that prize will not be an easy one to win.

“I think the coolest trick that I did today was the black flip double tail over to box jump,” said Cranmer.

But the competition was about more than just winning today.

“We are all here to support Brett,” said Cranmer.

It was also about showing support for 18-year-old Pro BMX rider Brett Banasiewicz or Maddogg as his friends, family, and fans like to call him, who is working hard to recover from a brain injury he sustained while riding back in September.

“He is running a mile and a half a day and he is in therapy 12 hours a day,” said Brett’s mother Lisa Banasiewicz.

His mother said he is about halfway through his recovery. She says physically and cognitively he is doing well, but he is still working on his speech.

Brett Maddogg Banasiewicz was all smiles as he watched his fellow pro skaters catch air on the half-pipe.  But he had an even bigger smile when his family brought out his redone truck.

“He does not know this, but his dad took his old diesel truck and had it wrapped with one of his favorite sponsors Rockstar and he is going to love it,” said Lisa Banasiewicz.

The winner of the 2013 Stay Strong Competition at the Kitchen Skate Park was Daniel Sandival.