Referendum would add $4.9M to yearly budget for Concord schools 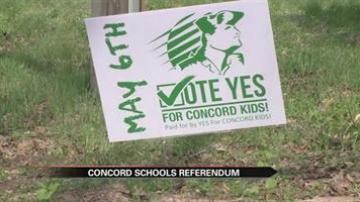 DUNLAP, Ind.-- A referendum for Concord Community Schools would add almost $28 million to the budget over the next 7 years. While many parents believe the schools are in need of major updates, several concerned citizens think that $0.405 on every $100 is too much money after the recession.

On Tuesday citizens will take to the polls to vote yes or no on an increase in property taxes.

The superintendent for Concord Community Schools said the money would be used for transportation and capital improvement.

Wayne Stubbs said, “We’ve lost teaching positions and increased our class sizes as a result of this.”

Since a statewide tax cap in 2006, Concord Schools have not updated their computers.

Stubbs said, “We got a waiver from the state of Indiana this year on ISTEP because our computers could not manage the online ISTEP testing.”

Some concerned citizens believe the school corporation should have made more sacrifices during the recession.

K.C. Clements said, “It’s not about me it’s the people that I know. The seniors, the single moms, the people in apartments that are struggling to pay even $3.80 for a gallon of gas.”

Some parents who have students at Concord High School think the increase in property taxes would not only help their children but also the housing market.

Jami Stamm said, “You can take the same house and just put it across the street in another school district and you’ll have a difference of 30-40-percent in value based on the school system that it lies in.”