Remains identified as those of missing Kosciusko woman 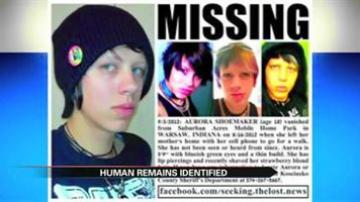 KOSCIUSKO COUNTY, Ind. -- The Kosciusko County Coroner's office has confirmed that the remains found in a wooded area on Sunday have been identified as those of a missing Warsaw woman.

Friends, family and the entire community in rural Warsaw never lost hope that they would one day find Aurora Shoemaker alive.

The remains found in the woods across the road from where Aurora lived were sent to a forensic anthropology team in Fort Wayne on Monday.

"That information then concluded that it was Aurora Shoemaker who was a missing person reported out of our agency back in August of 2012," said Sergeant Chad Hill of the Kosciusko County Sheriff's Department.

Investigators are still working around the clock to bring Aurora's family closure.

"It's still an ongoing investigation of the cause or the manner of her death. It's speculated, or estimated, that possibly by Friday there might be a cause or a conclusion by the Kosciusko County Coroner's office, after there's an autopsy," said Hill.

Although Aurora's death doesn't appear to be suspicious, authorities don't want to rule anything out.

"Obviously we don't close any particular doors, we leave all of those possibilities open, but I don't believe that there's any speculation that there's any foul play involved at this stage," said Hill.

They say not only do they hope to help Aurora's family move on-but also the entire community.

"In such a rural community that we are, we don't have quite often these types of incidents or anything like that. I think it might be a closure for the whole area hopefully. To try to move forward at that point in time, not to forget, but to move forward," said Hill.

We have spoken to Aurora's family. They are just trying to cope with the news of Aurora's death and do not want to speak on camera right now.