Remembering Father Theodore Hesburgh: A look inside his office 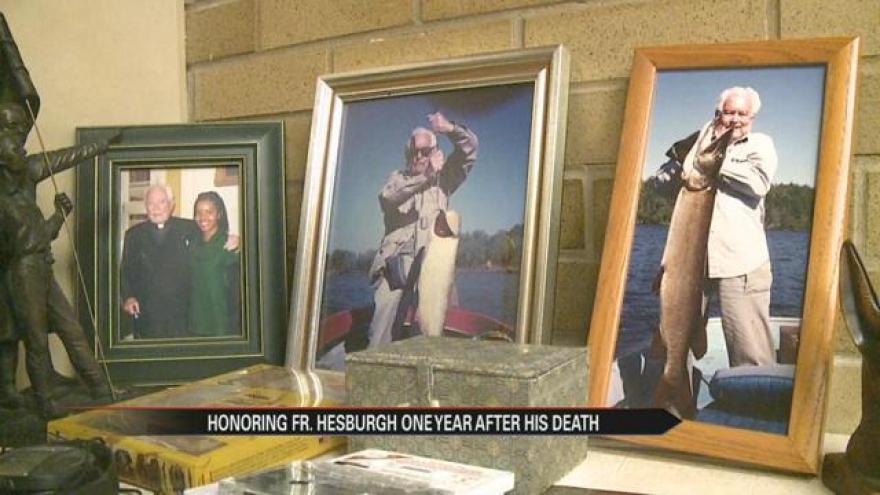 Friday, February 26th marks one year since Father Theodore Hesburgh’s passing, at the age of 97.

Father Ted served as president of Notre Dame for 35 years.

Among his numerous accomplishments, Father Hesburgh was instrumental in diversifying the campus and welcoming the university’s first class of women in the fall of 1972.

In 1987, not long after his presidency ended, Hesburgh  moved into his office on the 13th floor of the library now named after him.

ABC57 News got a rare look inside.

For the next 28 years and until his death, Hesburgh worked there nearly every day-- celebrating mass, reading and entertaining guests.

His office has remained exactly how he left it one year ago.

“As you look around his office, it’s pretty clear what was near and dear to him,” said University Spokesman Dennis Brown.

Family photos line the wall behind his desk.

On display are accolades he accepted throughout the years, such as becoming an Honorary Navy Chaplain.

Also on display was a more casual side to the iconic priest.

“He was an avid fisherman. So you’ll see fishing pictures. He was a cigar aficionado, so there’s still a little bit of a faint smell of cigar smoke in his office. And he was a veracious reader. He spoke seven languages and he read constantly,” Brown explained.

“We found a lot of photographs up here that we didn’t know previously existed. A lot of them are from his travels around the world. And a lot of them we think that he personally took,” she said.

Inside are photos from a trip Hesburgh took to China and India in the early 1980s.

It was where he met Mother Theresa.

“It’s amazing to look at his life and all the things he accomplished,” Hogan smiled.

University Spokesman Dennis Brown said Hesburgh’s wise counsel has been missed greatly in the year since his passing.

But the campus will continue to celebrate his life and the legacy he left behind.

“In that time I think people have really had the opportunity to reflect back and appreciate all that he did on behalf of the university,” said Brown.

At this time it’s unclear what will become of father Hesburgh’s office.

There is a possibility the school will display some of his and other former presidents memorabilia, in the future.