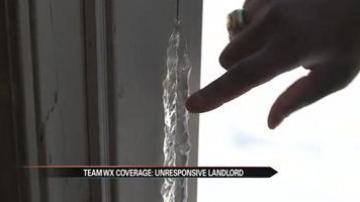 SOUTH BEND, Ind. -- A woman and her two children are freezing because the home she's renting is in such bad shape. Her landlord hasn't done anything to remedy the situation.

One of the biggest problems at the house on Olive Street is the door frame. There is a gap between the door and the frame and the gap is filling with ice, making it impossible to close the door. That leaves a large opening for bitter cold to enter the home.

"I didn't know that the door wasn't closed until this morning, I just realized that it was extremely cold in here, colder than it was the night before last when it was 16 below zero outside," said Shneka Johnson.

There is so much ice, the door won't close.

Shneka says she and her two kids nearly froze Tuesday night, and she says it wasn't the first time.

"About a week ago I woke up about 4:30 and it was extremely cold in the house so I got up and I walked back toward the kitchen and the back door was open," said Shneka.

Shneka's attorney says the back door has been a problem ever since.

"When I got here this morning Ms Johnson had this across the top of the door. She also had this at the bottom. You can feel the air coming through as If there's no door here. You can also see a gap, like I can almost put my index finger in the gap of the door," said attorney Elton Johnson of Elton Johnson and Associates.

"They tell me well right now there's nothing we can do," said Shneka.

We called the same number that she's been calling, the number that's listed on the lease, but were told we had the wrong number.

Shneka says there's no quick fix, but she will have to pay hundreds of dollars in rent to live in an ice box.

"Why should I have to pay you to live like this when you go home and you and your family is comfortable and content? All I want is a safe place for me and my family, that's it," said Shneka.

Code enforcement has been out twice and because of what they saw they have scheduled a hearing with the landlord, but it is weeks away.

The family is worried about spending another night in the bitter cold.