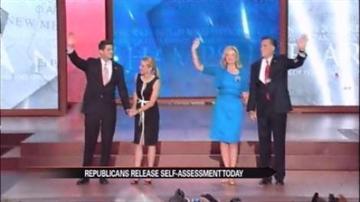 Republicans released a self-assessment Monday which detailed the party's failure in the 2012 presidential election and the prospects for the future.

The report sees Republicans as "out of touch" and dominated by "stuffy old men."

The GOP plans to improve its outreach to Hispanics, blacks, women and young voters.

They will be spending $10 million on the project this year.

"It's a very candid assessment. The question is whether this is just cosmetic or they will put the policy where their plan is," said Michael Falcone, ABC News deputy political director.

National leaders are planning a massive voter marketing campaign. It is designed to revamp the party's new media and get-out-the-vote efforts.