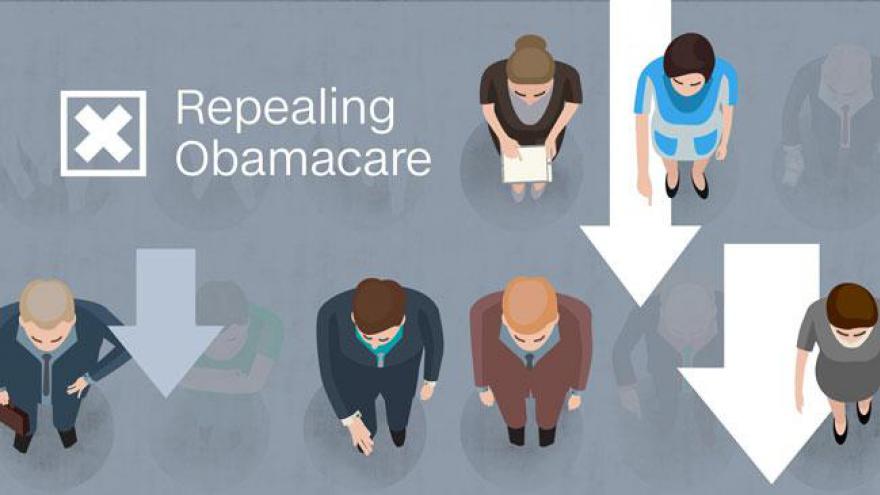 WASHINGTON (CNN) -- It's the moment they've been waiting for.

After years of attacking Democrats for Obamacare's shortcomings and running dress rehearsals to repeal it, Republicans this week will finally lay down a specific and actionable plan to scrap the Affordable Care Act and face the praise -- as well as the consequences.

"We're working through the final details of this," Rep. Kevin Brady, a Republican from Texas and the House Ways and Means Chairman, told Fox News Saturday.

It's taken years and five different congressional committees working in consultation to repeal Obamacare, but House Republicans are expected to take up legislation in committee for mark-up as early as Wednesday, according to aides and committee members. Since it's the first time most lawmakers and the public will actually see the bill, it's also the most significant test to see that the legislation can at the very least survive early flogging from all sides.

Republicans will likely unveil the bill with no final score from the Congressional Budget Office, aides say, noting that they've been consulting with CBO throughout the process so they have a good sense of how it may score. It's that very score, however, and the number of people the bill is estimated to cover, that has caused some heartburn for the GOP. While Republicans had long argued their plan would give consumers more flexibility, the reality is that the GOP replacement was not necessarily designed to cover more people than the Affordable Care Act did. The CBO score is expected to reflect that reality, which is part of the reason it is not expected to be part of the bill's initial unveiling.

But schisms over how to overhaul Medicaid, how to structure refundable tax credits, and whether to cap the tax exclusion on employer-based health insurance to pay for a replacement, which some have charged is no different than the unpopular Cadillac tax, won't be solved anytime soon.

Republican leaders have worked aggressively to forge consensus with their members in listening sessions and meetings behind closed doors in recent weeks, but the divides between conservatives and moderates, and those between moderates and lawmakers from states that expanded Medicaid under Obamacare are not going away.

"There is not a consensus at this point," Maine Republican Sen. Susan Collins said Sunday on "Face the Nation."

On Monday morning, Budget Director Mick Mulvaney, a former congressman with ties to House Conservatives, warned members of the Freedom Caucus about bucking their party on something as key as Obamacare repeal.

Mulvaney said on the Hugh Hewitt's radio show, that the "strategy is to try and get a bill that does what the President wants, which is to repeal and replace that is different than what passed the House and Senate in 2015, which was just mostly a repeal bill. But the President gets a say, and I respect that. In fact, he should have a say, and he wants to repeal and replace."

The White House hosted a "large staff meeting" Friday with administration and congressional staff to resolve outstanding issues, a senior GOP aide said. The House committees "worked over the weekend with the White House to tie up loose ends and incorporate technical guidance from the administration."

"We are in a very good place right now," the aide said.

The hard work begins after a public show of support from the White House Friday when Vice President Mike Pence and Price joined Ryan in the speaker's hometown of Janesville, Wisconsin, to rally for the contours of the House bill.

Over the weekend, Republican staffers in the House Energy and Commerce Committee as well as the House Ways and Means Committee continued to search for agreement on remaining sticking points, aides told CNN. But the thorniest issues will likely remain unsolved for now.

The goal in the weeks ahead will continue to be simply making enough members happy to reach 218 votes in the House and 51 in the Senate. That's the number of votes needed to pass the "repeal-plus" measure and number of people they need to convince Trump to sign it.

Republicans in the House and the Senate voted in 2015 to repeal President Barack Obama's signature legislative achievement, but members then knew they'd be protected by Obama's veto pen from suffering any of the political consequences if it went poorly.

This time around -- as some members have said -- the party is playing with real bullets.

Already, Democratic backlash against attempts to repeal the Affordable Care Act has been intense. Republican members across the country have returned to their districts only to be confronted by raucous crowds of constituents at town halls and outside their offices. The high-stakes negotiations have drawn such consternation that the evolving draft of the bill was being kept in an Energy and Commerce Committee office room last week, only available for Republican members of the committee to see.

The parallels to 2009, when the Democrats started work on Obamacare, are hard to ignore. Town halls, industry participants hammering away behind the scenes to save tax breaks and carve outs, allegations that leadership is hiding the details, even some of the proposals themselves appear to more closely mirror those pursued by Democrats than most Republicans would care to admit.

This is the House GOP leadership's trust fall.

The divides are only expected to get more pronounced once the bill is out there, but it's an unavoidable part of the process.

"The reality of it is there is no way to get this done if you don't make whole those states that were more fiscally responsible and did not expand," Sen. Tim Scott, a Republican from South Carolina, a state that didn't expand Medicaid, told reporters last week.

The bill was still undergoing changes, but as of last week the plan was for the federal government to eliminate the enhanced federal reimbursement for states' Medicaid expansion that was available for states under Obamacare in 2020. Starting then, states would receive a set amount of money each year to cover low-income people.

Meanwhile, a big obstacle to winning conservative support has been the issue of tax credits and how to structure them. While Ryan and Price's plans both included refundable tax credits in the past, conservatives like Sen. Rand Paul, of Kentucky, have dismissed them as little more than "Obamacare lite."

Even if Republicans are able to begin voting on a bill in committee this week, temper concerns of conservatives and move it along, there are a whole bunch more hurdles awaiting the bill once it leaves the House.

When asked if he thought the House legislation as he understood it would pass in the Senate, Sen. Lamar Alexander, the chairman of the Senate's Health, Education, Labor and Pensions Committee, said honestly "well, I don't know."

"I'm not gonna make a judgment about that until we have a bill," Alexander said.

"At some point, we have to come to some kind of agreement that we have to have 51 votes. We all have ideas. We're consulting, consulting, consulting taking ideas, improving the bill and after awhile we'll have a final bill," Alexander said. "We'll put it on the floor of the House and if they pass it, we'll put it on the floor in the Senate and we'll vote on it. That's the way the legislative process works."

CNN's Phil Mattingly and Deirdre Walsh contributed to this report.