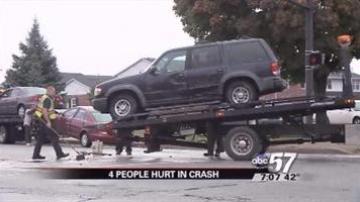 MISHAWAKA, Ind. --Rescue crews rushed out to the scene of a nasty crash in Mishawaka.

Three vehicles collided at the intersection of Main Street and Catalpa Drive. Four people were injured in the crash.

Firefighters had to call additional ambulances to transport the victims. First responders say the scene was such a mess they couldn't figure out how it happened.

Those injured in the crash are expected to be okay. Firefighters say the injuries turned out to be minor.