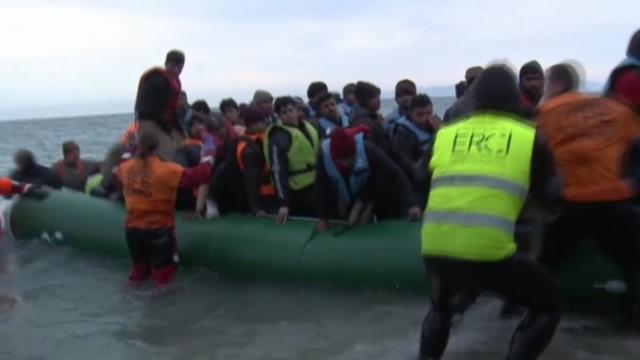 For the past 30 years South Bend and its surrounding cities have been welcoming refugee families from all over the world.

Now, South Bend’s Mayor Pete Buttigieg, is one of only three mayors in the whole state pushing to continue those welcoming standards.

The move goes directly against Governor Mike Pence’s plan to keep refugees out of Indiana.

“I usually stay out of national issues, but I view this as a community issue too," said  Buttigieg.

After an international attack, Pence ordered all state agencies to suspend the resettlement of Syrian refugees.

"Our community is built by people from all kinds of different backgrounds who came here from countries like Poland and Ireland to Italy and Mexico," Buttigieg said.

Refugees come from all over the world to the crossroads of America.

“We are going to arrive at 12 o’clock in the morning," said Haider Alkilidar, who is an Iraq refugee.  "I don’t know how we will find a cab, I don’t know where we are going, I don’t know if there is a hotel, I did not think there was a welcoming party for us at the airport.”

Heather Ghormley started an immigration legal clinic called Tree of Life to become a beacon of light for refugees left in the dark.

“Not only was this uncharitable and not in the spirit of America, which is a country based on immigrants, a country that has always extended its bounty to the world, but also an affront to our religious freedom and our ability to express our religious convictions of welcoming a stranger," said Ghormley.

Those refugees are fleeing countries torn apart by civil war and the threat of daily violence at the hands of ISIS.

“You don’t feel safe when you cross a street, you don’t know when the car next to you can go off," said Alkilidar.

The survivors are now spilling onto American soil.

“If you are a refugee or an immigrant that recently arrived in south bend or even have been here for a while there are at this point no formal programs that are connecting and serving you," said Ghormley.

Many turn to the legal clinic for help.

“Many people believe that refugees are fascinated on being refugees they just want to jump in new countries and get rich and my case was not that," Alkilidar said.

Alkilidar was forced to resettle from Iraq with his children after his wife was killed by a car bombing.

“So I decided to save what’s left of my family and move to a different country," said Alkilidar.

His story, like so many others, is one of survival.

Ghormley, along with eight other local religious leaders recently sent a letter to Gov. Pence urging him to reconsider his stance on refusing refugees in need.

“That’s a real concern we all want to be safe and we all want our children to be safe," said Ghormley.  "We don’t want to let bad people who want to do us harm into our country and yet there are 14 million displaced people because of this war in Syria.”

They’re proposing that local religious groups share the burden of caring for these families, along with the state.

The system of vetting refugees was completely overhauled after Sep.11.

“Of all the ways to get into the United States, the refugee process is probably the strictest," said Buttigieg.  "It takes about 18 to 24 months of the vetting by the intelligence community, the Department of Homeland Security, FBI and a lot of other agencies involved.”

The interview process is so extensive it can take years for a refugee to be resettled.

“Even the two kids, they asked about all our passports and all the phones we have used, email accounts, internet accounts," said Alkilidar.

But once they are given the green light and by chance end up here in Michiana, where can they go for social services?

According to Ghormley, they enter through her doors looking for any help they can find.

“My other hope for South Bend in is that Mayor Pete has said that he would like to welcome Syrian refugees to our area, and that my hope is if that happens that the whole community is gathering together to think about how to welcome these refugees.They are going to need really deep counseling, they have been through horrible traumas. They're also going to need education about what it means to be in an American, context about American culture. They have probably heard some pretty horrible things actually about us and that is going to need to be addressed,” she said.

For now, Ghormley will continue to keep her doors open.

“The U.S. will not see other nations suffer and close their door," said Alkilidar.

The Tree of Life Anglican Church will continue helping those who see a comforting word, medical or legal advice, or just a place to feel welcomed.