Resident finds burglars in his home, chases them out 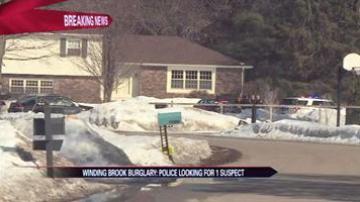 MISHAWAKA, Ind. -- Around 2 p.m., a man came home and discovered several people inside burglarizing his home. It happened at a home in the Winding Brook neighborhood in Mishawaka.

When the resident found the suspects in his home, he chased them out the door.

"When he walked in, he heard some noises toward the rear of his house and at first he thought it was his own children. However when he came toward that area of the house the suspects ran out the back, he took a few steps after them and tried to get a description of them for us so he could at least give us something to go on," said Lieutenant Matt Blank of the St. Joseph County Police Department.

He gave police a description of the getaway vehicle.

Police caught one person in the alleged getaway car. A second suspect was located on foot.

Several residents said there were computers and other electronics in several back yards. They believe the suspects ditched the items while running.

St. Joseph County Police said the two people arrested did not have any weapons on them at the time of arrest and no one was hurt.

Police have not located the third suspect, but they do not believe he is in the neighborhood any longer.