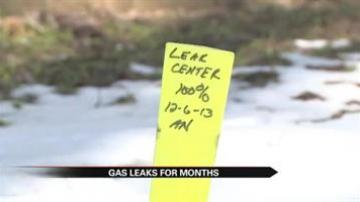 SOUTH BEND, Ind. -- A South Bend mother says she lives in fear because gas has been leaking in her back yard since December. She says NIPSCO has come out to monitor the gas, but hasn't fixed the leak.

Chairez says gas has been seeping out of the ground in her backyard since early December.

"The smell, it overwhelms you at times and it makes you sick," said Chairez.

Chairez says every time she calls NIPSCO they come out to look at it.

"That hole right there is where they take some kind of a stick and jam it in to the ground," said Chairez.

She says they run a few tests, tell her the leak isn't getting worse and tell her not to worry.

"How is it safe for my kids to play in the back yard when it makes me sick?" said Chairez.

Chairez says her kids haven't been outside in months.

"You know you always hear horrible things about people not waking up because of things like that and that's one of my worst fears," said Chairez.

At this point, the mother of four feels helpless.

"It worries me on a daily basis. Are we going to wake up tomorrow? Should we even go outside? It's like held over your head and you don't know what to do. It's out of my hands, there's not much I can do," said Chairez.

She just hopes that next time they come out, they actually fix the leak.

We contacted NIPSCO and they said they have been overwhelmed with major gas leaks and heating issues because of the weather and cold temperatures.

While they say all gas leaks are important, they have to fix the ones that stem from big pipes before fixing the ones from smaller pipes.

NIPSCO says they have been alerted to this one, they will see what they can do to fix it as soon as possible.