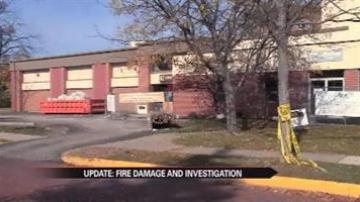 ELKHART COUNTY, Ind -- It has been about a month since a massive fire nearly destroyed an entire Elkhart city block. Flames ripped through the Lifeline Youth Center, an old shoe shop and a building with five apartments.

“I mean it's a real tragedy if you look to what's happened. And it's a real shame,” said Michael Miller who went to Lifeline.

Debris is littered across the block.

Since September 23 on E. Street, Miller says rumors have been spreading about how the old shoe shop went up in flames.

The chief inspector says he just handed the case off to Elkhart City Police on Monday.

“I hope they get everything redone for the kids. My biggest concern is that the kids have a place to go because this was a great benefit to keep kids off the street,” said Miller.

Miller went to Lifeline when he was 11 years old.

His family members used to go there too, along with a lot of kids in the neighborhood.

“They keep kids off the street. Kids that would normally be running around, causing trouble ends up going to Lifeline. They play basketball, have a basketball team, they do summer activities. They hold charitable events. I mean there is all kinds of things Lifeline has done to benefit the city,” said Lifeline.

Walking through the neighborhood, Miller says a lot has changed since the building was fenced off to kids and teens.

“They're causing more havoc. I mean I've had to replace my door twice because some kid comes up and rips my screen door open. That's never happened until this happened,” said Miller.

Neighbors say the kids can go to other locations for Lifeline events.

“It's not the same as having a big old facility for yourself. The schools can only offer so much for so long,” said Miller.

Miller wants the youth center back up and running.

“Hopefully when I'm still here and everything else, my son will go here. It's a great thing for kids to do and I can't emphasize that enough,” said Miller.

The victims of the fire are still recovering.

The fire inspector says one man is doing better and is stable. Another is in bad shape and has been moved to a nursing home.

A third victim, a female, is conscious at a hospital in Fort Wayne.