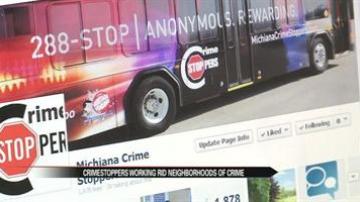 SOUTH BEND, Ind. -- Everyone wants a friendly neighbor, but what if one of your neighbors is selling drugs? We found out how you can report suspected drug activity on your block. One River Park resident says his vigilance forced dozens of drug houses out of the neighborhood.

What are the signs of a drug house? They don't get typical traffic. They often get a lot of visitors at odd hours of the day and night. And often, the visitors don't go inside, but are met at the car door for a brief exchange.

"You'll have people drive in all times of the day. Sometimes they cell phone and stop. Sometimes they have door to door service from their car door to your car door," said Phil Niswonger of the River Park Safety Committee.

Niswonger has lived in the River Park neighborhood in South Bend for 31 years.

He has seen a lot of drug houses pop up.

Drug activity is present in every city and county in Michiana and Lieutenant Cindy Kilgore of Crime Stoppers says the number of calls reflects the growing problem.

"We get a lot of tips on drug activity," said Kilgore.

"Probably the number one kind of crime that we get tips on would be helping to locate felony fugitives and tips on drug activity is significant," said Kilgore.

Lt. Kilgore says you can call police to report any suspicious activity, but many people worry about retaliation.

That's why it may be best to anonymously report a neighbor's activity by calling Crime Stoppers at 574-288-STOP, 800-342-STOP or visiting their website.

The more complaints, the greater the chance an investigator checks out the house.

"They will do sometimes what they call a knock and talk where they will just take some information they had in a complaint and they'll go and show up," said Kilgore.

Niswonger says when it comes to kicking out bad activity, there is strength in numbers.

He's even sent out flyers to neighbors who live near a suspicious house to alert them of the problem.

"We've been able to eliminate 7 drug houses and we primarily would triangulate the house with more than 1 or 2 or 3 observers," said Niswonger.