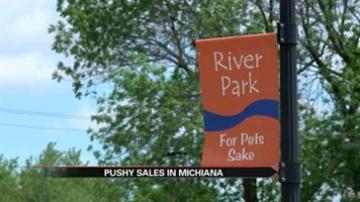 SOUTH BEND, Ind. -- Residents in the River Park area say a small group of men peddling home security systems door-to-door are too pushy and won't take no for an answer.

Residents say representatives with Vivint, a home security company with headquarters in Utah, are knocking on doors seven days a week, sometimes as late as 10 p.m.

"She basically pushed him out the door and then he started crying so then she felt bad--so I told her just shut the door and be done with it," said Robin Hersom.

Hersom lives in River Park with her parents. They were visited by a Vivint salesman.

"He became very rude, was questioning why I wasn't interested and I told him I didn't feel like I had to explain that to him," said Hersom.

Hersom says the salesman tried every pitch in the book and then when that didn't work - he used tears.

That's just one of the many bizarre stories.

"One time it was later on in the evening and we're just like 'We're not interested.' And then they keep on going to all the houses. They are literally walking River Park," said Penny Rhoads.

We contacted the company's headquarters and spoke with a customer service rep about the pushy peddlers.

She said the salesmen should never push to enter a home, always present their ID, knock during normal hours of the day and never in the dark.

Most neighbors say they're not following the rules.

One man says he had a pleasant experience

"With multiple sales people you can always have someone pushy so I've been in sales and I understand there's pushy sales people but this, the gentleman that came yesterday, was very professional and well-mannered," said Eddie Shaw.

If you had a bad experience with Vivint, the company wants you to call them and give them a description of the salesperson.

Although this company is legitimate, it isn't accredited by the Better Business Bureau.