Residents fed up with potholes in Benton Harbor 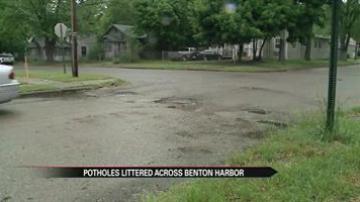 BENTON HARBOR, Mich. -- Drivers in Benton Harbor are still dealing with roads full of potholes. One resident says a pothole caused almost $500 worth of damage to her car. The city says the weather has hindered their ability to repair the roads.

That was the first sign something was seriously wrong with Bell's car after she drove over a pothole on May and McAllister in Benton Harbor.

"They covered it up with dirt and rocks, so it's like ease over because it's a pile of rocks and dirt to keep from the rocks popping up into the car. As I eased over my whole front end sunk down and popped back up," said Bell.

She had no idea how much damage one pothole could cause.

"They told me my control arm had broken, my wheel bearing which I had just got that done at Lee Valley a couple of months before that, so I had to get all of that replaced. It was $477," said Bell.

Bell isn't the only one swerving through the streets of Benton Harbor.

Henderson says she too will have to fork over some cash to repair pothole damage.

"I need a front wheel alignment. Hitting those potholes, you don't realize how much damage it's going to do until you get up on it and you try to dodge them and there's one on this side when you're trying to dodge one right there," said Henderson.

Henderson drives Colfax almost every day to drop off her kids at the high school. As each day passes, she says her patience is wearing thin.

"Right here on Colfax it's horrible. I know the weather throughout this winter season caused a lot of damage, and I know that they are working on it, but it's just doesn't seem like they're getting to it fast enough," said Henderson.

Benton Harbor City Manager Darwin Watson is asking for your patience. He says as the weather gets warmer and drier, crews will increase the number of hours spent patching potholes.

He doesn't have an estimate on when repairs will be complete but he says it will be as soon as possible.