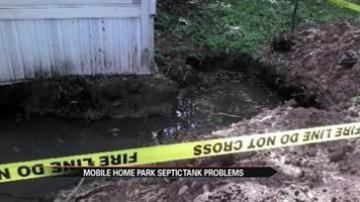 NILES, Mich. -- Residents of the Country Acres Mobile Home Park in Niles, Michigan are speaking out because they're fed up with the septic tank issues and sewage flooding around their homes.

Residents say they can't wash their clothes at home because they end up smelling like rotten eggs.

"It's nasty, it's raw sewage that has permeated the ground// I don't even let my dogs back here bc im scared of what will happen," said Ricky Snyder.

Snyder has lived in country acres for years.

Snyder says it's plain and simple, the septic tank systems in this park don't work.

He says he helped his neighbor clean waste off her walls and furniture.

"She had raw sewage actually explode in her house! It was like a volcano," said Snyder.

Snyder says he has been dealing with this issue for too long.

"They put band-aids on it instead of fixing it right for over a year," said Snyder.

Now, Snyder says enough is enough and he's got one message for the owner of this park.

"If he's going to own somewhere like this he needs to maintain it for the well being of his tenants," said Snyder.

We tried to get in touch with the owner of the park and left a message with his secretary.

We also contacted the health department and were told they have a plane in place, but didn’t provide details.