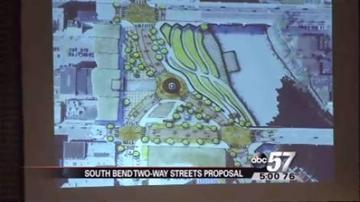 It's a proposal that's been in the works for months-- but for the first time, citizens of South Bend heard just what two way traffic can do for them.

"This is something that I view as an economic development initiative. Not a streets development only because it's really going to have the potential to change the ability of the downtown economy to come into its own," said South Bend Mayor Pete Buttigieg.

The mayor argues that two way traffic in downtown would encourage the growth in areas of the city that so far haven't seen as much revitalization.

"Comment was made to me when I was a stranger to the city 20 something years ago that when the streets were turned to one-way it really killed the business downtown. Whether that's true or not I don't know. It's coming back, but not as much as it could be," said Al Koch, who has owned a downtown business for 24 years.

There were few arguments made against the proposal.

The concern lies primarily in the financial timing.

"The money could be better spent in an entrepreneur program that allows people to become business owners or the money could be used to recruit businesses into the city so folks can have a place to work so they can take care of their families. I think it's misplaced. I think it's too high on the priority list and I think we need to really try and make sure folks are employed," said Henry Davis Jr. South Bend Council member.

Councilman Oliver Davis says he's waiting to hear the details of the proposal when it is presented to the council for a vote.

But he also believes the $11 million for this project could be better used in other areas of the city.

The final budget hearing is in October.