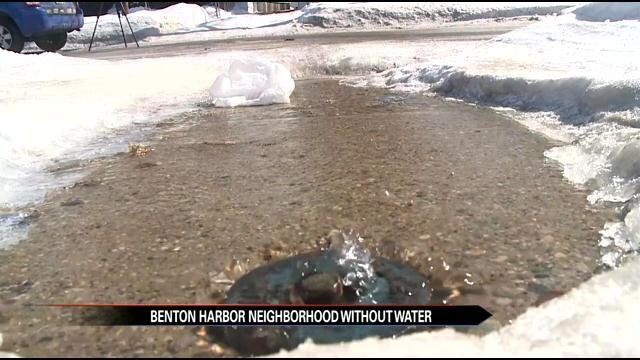 On Thursday several Benton Harbor residents were still without water, but the city established a plan to thaw the frozen pipe lines.

The City Manager's office issued a release saying they are bringing in an outside company to fix the frozen lines and they will split the cost with customers.

It will cost homeowners $75 and they need to sign a release at Benton Harbor City Hall to allow crews to dig on their property. To get on the list to fix the line, customers must make the payment in advance to the Benton Harbor Finance Department.

One resident on Columbus Avenue said he hasn't had water for six days.

Steven Fletcher said, “We called the city and they said everyone's pipes are frozen because we didn't have the water running or something so the pipes froze up and plus that right there is taking all the pressure off our water so we have low pressure!”

Fletcher said there is water gushing out of the ground by a driveway.

Fletcher said, “They came out Sunday morning and they told us because our basement was too cold that they couldn't do anything about it. This never ever happened so I don't know. They're just lazy or something.”

Andrea Smith said she's not sure why it's taking so long to fix the pipe problem.

Smith said, “This is very frustrating for something like this to happen! Benton Harbor needs to get on the job!"

Smith is mad about the water that's flowing into the street from the ground, and she's worried her utility bill will be expensive.

Smith said, “We have running water but now I see that they're probably going to send us a letter now stating that our water and sewer went up or something so I might as well prepare myself. This is just ridiculous, I mean look at this!”

ABC57 stopped by the City Manager's office to find out more information, but City Manager Darwin Watson was too busy to do an interview on Thursday.

If residents are still without water, Mayor James Hightower said they need to report the problem to their utility company so the city knows who is still having issues.