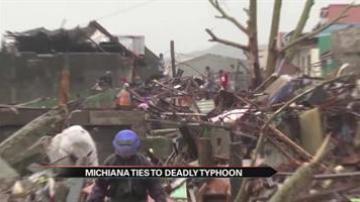 BERRIEN COUNTY, Mich. -- The Red Cross is estimating that nearly 10,000 people in the Philippines are dead after Typhoon Haiyan destroyed most of Tacloban City. Local residents have been trying to get in touch with relatives to see if they are okay.

Racasa says waiting to hear whether her family survived has been terrifying.

She says her friends at Andrews University have helped her cope.

"Talking in class and letting them know my family made it through, it brought up a lot of emotion," said Racasa.

Professor Arleen Saliba found out a cousin is still missing.

"There's a bridge between the two islands so he took his motorcycle and he couldn't get through because the roads were washed out and there were landslides and trees in the way," said Saliba.

Andrews University's Filipino International Association is organizing a fundraiser for victims in the Philippines.

"They will need medical supplies because a lot of people have been hurt and I think a lot of it will go to food and some temporary shelter for these folks," said Saliba.

The Filipino International Association will be holding fundraisers throughout the week and will be accepting donations online. Click here for more information.