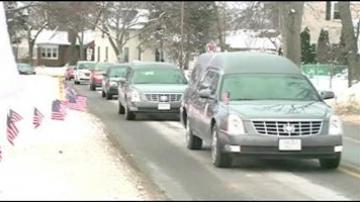 ELKHART, Ind. -- Several streets in Elkhart were closed Friday for the funeral procession of Army Staff Sergeant Jesse Williams. Many people lined the street to pay their respects to Williams.

Many of the people lining the street didn't know Williams, but they wanted to honor his sacrifice.

Gary and his wife Lynn set up flags along the road. They said they know what Williams' family is going through.

"Our nephew was injured in Afghanistan 6 years ago yesterday and passed away of his injuries in March," said Lynn.

They wanted to pay their respects to Williams and remember their nephew.

"We do it to honor his memory and for all families who have lost a soldier," said Lynn.

Other families lined the road just to honor a hometown hero.

"It's the right thing to do that's why I have my daughters with me," said Warren Alwine.

Over a thousand people attended his funeral at Granger Community Church.