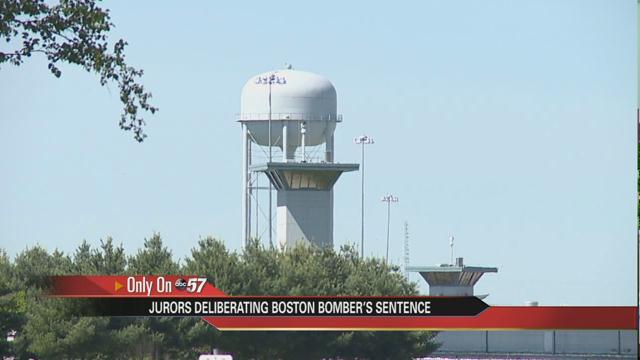 The jury began deliberations in the penalty phase of the trial of Boston Marathon bomber Dzhokhar Tsarnaev. If he is sentenced to life in prison, he could be sent to prison in Colorado. If sentenced to death, he could end up at the federal penitentiary in Terre Haute.

Across the street from the penitentiary is a row of houses.

For some people, that may be too close for comfort.

For Alex Johnson, it's just another neighbor.

“I've heard the sirens go off a couple times when there is a near escape someone made it up on top of the building but they never go off the grounds but they had search lights and everything else,” said Johnson.

Johnson has lived there with his wife and three kids for 3 years.

He says having 1100 men locked up in this high security prison doesn't faze him at all.

“The prison has been here forever and they built another one. There are two prisons now. It's just kind of in the background. It's not something people even notice and it's nice looking, it's a nice area they keep it up well. It doesn't affect anything,” said Johnson.

He didn't live in the house in 2001 when Timothy McVeigh was executed but he lived in town and said that was all people were talking about.

“It was kind of a big deal. News agencies, there were a lot of protests but this area was lined up with people at the time, no place to park cars. But since then we really haven't had anything that compared to that,” said Johnson.

Johnson says he's been keeping up on the bombing case.

“If he comes here it won't change anything. We've had terrorists here before and it probably won't be the last time it happens here. So this is something you can't change who you are or how you live your life because of someone who may live across the street,” said Johnson.

He says he is still interested about who is across the street, what they are locked up for and who is sitting on death row.

He believes it's likely Tsarnaev will be sentenced to death.

“It's a pretty emotional case and he doesn't seem to be too invested in it and that may hurt him .I have a feeling that it might, might be the death penalty,” said Johnson.

“He affected a lot of lives, hurt a lot of people. For me just to be strong on what he represents I think the death penalty might be the way to go. But again, some of the victims will have to relive it every time they go to an appeal process so if you think about them you may just want to keep him in prison forever. But the right thing to do would be the death penalty,” said Johnson.

While the federal prison may not do much for his property value, he says he's not worried about the possibility of this high profile case coming to a close in his front yard.

“This is something that probably won't happen for the next decade even if he is given the death penalty. This is not a 1 year process. This will be a long time from now. By that time we will have to worry about it then I guess,” said Johnson.

Experts say a decision by a jury could take days.

In order for Tsarnaev to be sentenced to death, the decision by the jurors must be unanimous.

Currently, 5 men are on death row.