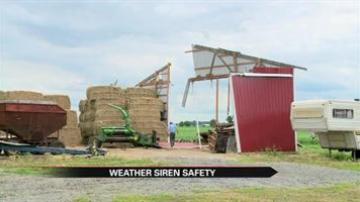 "It started lightning then there wasn't no wind and then the wind picked up and started pouring rain. Trees started going everywhere. It shook my trailer a little bit," said Chrissy Hollon of Winona Lake.

The late Monday, early Tuesday morning storms hit hard and fast. They knocked down trees and power lines-and claimed two lives - one in LaGrange County and one in Kosciusko County.

"Some of the winds that we were seeing were upper 70 to 80 miles per hour winds which are every bit of what you would find in a tornado," said Ed Rock, Kosciusko County Emergency Management Director.

For some residents those winds hit with little warning.

The 70 to 90 mile per hour winds lasted just minutes, but left behind a lot of damage.

There were no sirens, no alerts, no warnings. That's why the experts say you need a back-up plan.

"The hope is that the siren will wake you up if it's fired properly, but if it's far away or there isn't one near you, you might not hear it. So the next good back ups are a mobile app. It'll alert you whenever there's any severe weather that rolls on through any watches or warnings that you hear will pop up on your phone," said ABC57 Meteorologist Greg Bobos.

"The text messages and the alerts that come across your cell phones are probably as reliable if not more reliable than a tornado siren because a tornado siren has to be activated by someone," said Rock.

The weather experts say mobile apps and alerts can help you react and plan much faster than a tornado siren, which may only be activated during a tornado warning.

Rock says the sirens in Kosciusko County are activated by individual jurisdictions and towns only during a tornado warning, which Winona Lake was not under late Monday and early Tuesday.