Residents on CR108 want drivers to slow down 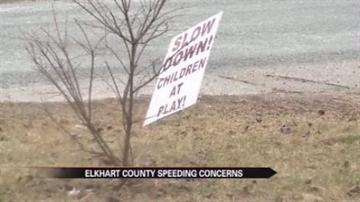 ELKHART COUNTY, Ind. -- Residents on County Road 108 in Elkhart County are worried another person is going to be killed by a speeding driver. They’re doing everything they can to get drivers to slow down, but they say nothing is working.

Michelle Johnson and Crystal Wright like their Elkhart County neighborhood.

They don’t like drivers who disrespect the 30-mile-per-hour speed limit.

"We've lived here for about seven years and yes it's always been a constant problem,” said Johnson.

"I wish they would slow down. I got two children at home,” said Wright.

Last summer a 12-year-old girl was killed walking on this road after she was hit by a speeding driver.

"Everyone outside was yelling to slowdown look out there somebody and he kept on going and just ran her on down,” said Wright.

"I made the signs up and sold them to all of our neighbors and the proceeds ended up going to her family,” said Johnson.

"I don't want my daughter getting hit or any other child for that matter,” said Johnson.

"There's usually not that many cops that come out here all that often,” said Wright.

Using an iPhone app, we clocked some vehicles going over 50 miles an hour.

The sheriff's department says deputies are out patrolling.

In the past year they've issued 255 citations for driving violations on this road alone.

But Johnson says there were several Sunday morning when a van came barreling through her neighbor’s yard.

The Elkhart County Sheriff's Department says Sunday's accident was intentional so they're not counting it in the statistics.

In the last few years, they say there have been four accidents along this road.

Neighbors think the only thing that will curb speeding is to add a 4-way stop at the intersection at Third Street and CR 108 down the road.