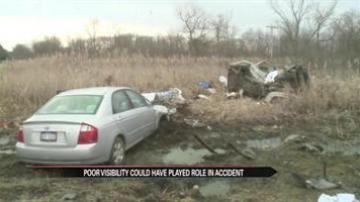 BERRIEN COUNTY, Mich. -- Several people were seriously hurt Saturday after two cars collided near the intersection of Park and Meadowbrook roads. Nearby residents say the accident was likely caused by poor visibility.

"It sounded like a stick of dynamite going off," said Jim Peek, who lives next to the intersection.

Peek hears a lot of accidents.

After hearing the accident Saturday, he and his wife ran out to help.

"It threw these kids out, these little babies. I think one of them was just six months old, and my wife waded out in that swamp and picked it up," said Peek.

It's not the first serious crash he and others have seen there.

Neighbors say there are accidents at the intersection because of poor visibility because of vegetation and heavy traffic.

"They ignore the stop sign," said Evelyn Stevenson, who lives next to the intersection.

Stevenson has also seen a number of accidents over the years.

She's pushing for the county to add an extra stop sign - or - clear some brush.

"It'd be more comfortable if they would," said Stevenson.

But it might be against state law to do that.

The Berrien County Road Commission says they can only add a four way stop sign if there are five crashes there in a year.

So far this year there have been three bad accidents there.

Peek thinks that should be enough to warrant a stop sign.

"For no more than a stop sign costs, I can't understand why they don't do it," said Peek.