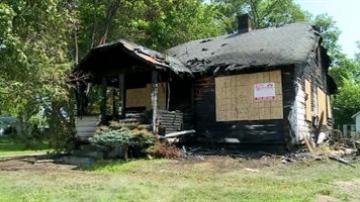 SOUTH BEND, Ind. -- A home on South Main Street in South Bend was destroyed by fire Sunday morning. Although the fire department found the home easily, if you use GPS to try to locate it - you'll get lost.

Many of the homes on the border between South Bend and the county don't come up when you put them in the GPS.

"The GPS, it all shorts them north of the bypass every time everybody shows up and they have no idea this part of Main's here," said Shane Richards.

Richards' home, at 5270 S. Main Street, was one of them until it burned to the ground Sunday morning.

He says other neighbors constantly complain about their homes being off the map.

"Anyone trying to find me has to call me and get directions," said Barbara Budgett.

The front of Budgett's house is on Jackson and the back of her house is on South Main Street.

"Google Maps thinks that my house is 6 blocks that way. 6 blocks west yet," said Budgett.

Firefighters say that's why they don't use GPS. Otherwise, it could have taken them much longer than fie minutes to find the home on fire.

"You have to realize, not only does the driver know where he's going but there's 3-4 other guys in the rig so anyone of those firefighters are not going to let the driver go way out of his way before someone realizes," said Captain Gerard Ellis, Public Information Officer, South Bend Fire Department.

That's something Budgett is happy to hear. When she heard those sirens on Sunday, she was worried firefighters wouldn't be able to find her.

"Today I was going to give EMS and the fire department a call and also the electric company too as well to say you know-- this is how you get to me," said Budgett.

Firefighters say they study the paper maps for a reason. When all else fails electronically, they can rely on a good old fashioned paper map.

The cause of the fire at the Richards' house was determined to be a candle left burning in an unapproved container, according to the South Bend Fire Department.