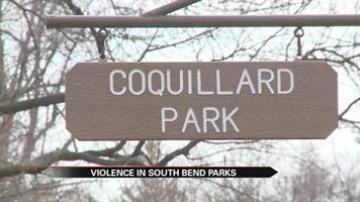 SOUTH BEND, Ind. -- Investigators say the shooting that killed a 2-year-old on Wednesday started at Coquillard Park in South Bend. They said two groups were fighting, shots were fired and one of the bullets killed the toddler down the street.

Nearby residents say the park has become a staging ground for violence.

"The park was really nice and you didn't have to worry about all this that's going on now," said one resident who has lived across from Coquillard Park since 1962.

"They do that at night I believe when no one is around," said the neighbor.

Neighbors say that's just the half of it.

"I do know that they exchange dope and stuff out here because it'll be a car that pulls up, about 10 minutes later another car will come. One will get out, go to that car and then that car leaves and then they leave behind them, they do that during the day time," said the neighbor.

For residents of Campeau Street, what happened Wednesday was unthinkable.

South Bend Police say prior to the shootout, this park wasn't really on their radar

"As a police officer that listens to his radio on a regular basis, it is not by any stretch a nuisance area," said Phil Trent of the South Bend Police Department.

Residents say it needs to be.

Some say a 24-hour patrol car would keep illegal activity out of the park.

Police say it's not that simple.

"A couple of decades ago there was money for that. I don't see our department ever being able to have that sort of position to fill," said Trent.

Many are hoping the shootout is not a sign of what's to come.

The South Bend Parks Department has police officers that patrol parks daily but they have a lot on their plates.

We asked if they see room in their budget to add 24-hour police and they said they're looking into it.