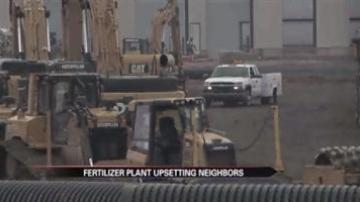 KOSCIUSCKO COUNTY, Ind. --  In Milford, construction is underway on a new $30 million fertilizer plant, but some neighbors aren't happy. They claim the work being done isn't what was promised.

Neighbors say their lifestyle has changed drastically. Since construction began, they've had trouble with dust and flooding. They say the noise and the landscape changes upset them the most.

Dave Letherman bought his quiet country home back in 1976.

A self-proclaimed farm boy, he moved to the area for solitude.

"It was a great place to live," said Letherman.

But now his home is anything but peaceful.

"It's big business, and they're going to do what they want," said Letherman.

Crews are building the fertilizer facility just south of the Elkhart County line and Letherman's backyard.

He says Trupointe, the company building the massive plant, isn't being the good neighbor they promised they would be.

They told Letherman that the construction would have little impact on his life.

But dust and heavy machinery have become such a nuisance, he can't even open his windows anymore.

He says the worst is yet to come. The company is adding a rail line right next to his property.

"If I would want to relocate, how am I going to sell what I've got? Nobody in their right mind is going to buy this place," said Letherman.

Living right on the county line has complicated the situation even more.

Letherman has asked for help from both Elkhart and Kosciusko counties, but isn't getting anywhere.

He feels taken advantage of.

"We're kind of out here by ourselves," said Letherman.

He doesn't know where to turn next.

We contacted Trupointe. A company spokesperson says they're aware of some of these issues and they've taken steps to correct them.

And they say they're working with neighbors to resolve some of the others.

UPDATE: Trupointe issued the following release saying they have followed the site plans and everything is where it should be.