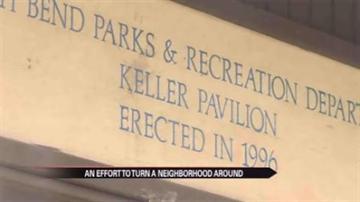 SOUTH BEND, Ind.-- The Keller Park neighborhood has dealt with its fair share of crime through the years. But now community leaders are taking big steps to turn it around.

And that's what she's doing in hopes of turning the neighborhood around. The first item on her agenda: a block party funded with money from the Neighborhood Resource Corporation.

"They've helped us out a lot and that's basically what we're doing. We're trying to clean up our neighborhood and make everybody realize that we're here," said Walker.

They want to stop the crime that's plagued the area for years by increasing the lighting on the streets, creating more activities for the youth and using volunteers to patrol the area each night.

There are 36 neighborhood associations in the city of South Bend, but only a third of them are active.

Jean Borders has lived in Keller Park for 38 years. She's anxious for the new watch program to  start up in August.