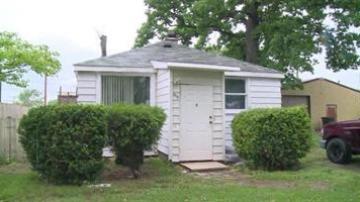 ELKHART, Ind. -- Residents in one Elkhart neighborhood have been having septic tank issues since the home damaged in a meth lab explosion a year ago was demolished last month.

The Anderson family, on Fieldhouse Avenue, says they have just a few weeks to come up with thousands of dollars and cut through the city's red tape in order to save their home.

"We thought we had the American dream, we own our home outright," said Leonard Anderson.

Anderson says that dream is quickly becoming a nightmare.

"Now we're looking at possibly in a couple short weeks, getting thrown out of our home and we don't know what to do or who to turn to," said Anderson.

In July 2013, their neighbors' home caught fire after a meth lab exploded. The home was demolished last month and the company next door purchased the lot.

Elkhart Hinges has immediate plans to extend their property and put a loading dock in. Part of that construction includes digging up the septic and the pipe that connects to Anderson's septic.

"I've been told that this Friday, the 6th they are going to crush the pipe and get rid of the septic which is going to make the home uninhabitable," said Anderson.

"For me to hook up to the city water and sewer that's tied up in a bunch of legal paper work with the city," said Anderson.

He says he's dealing with a lot of red tape with the city of Elkhart.

"[It] could take up to four months before I'm legally able to hook up which is going to leave me homeless for almost 4 months," said Anderson.

The city of Elkhart says the Andersons' issue cannot be addressed until mid July at the Planning and Zoning Committee meeting.

"We just want to live in our home. To be honest, we feel helpless," said Anderson.

The owner of Elkhart Hinges says he does not want to leave this family in a situation where they have sewage back up into their homes so he is postponing his construction plans to mid to late July but he says he cannot hold off forever.