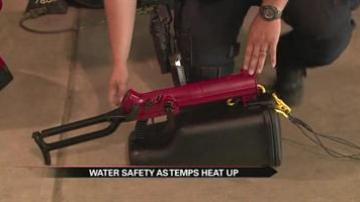 BERRIEN COUNTY, Mich. -- There were two water rescues at two different locations Sunday. One was at Weko Beach and the other was at Warren Dunes. One officer was able to save two people thanks to a new device called ResQmax.

"I heard over the radio that Warren Dunes State Park Rangers were asking for assistance for water rescue. I turned around, knowing that I had it in the car, went to the park immediately," said Officer Rob Hahn of the Chikaming Police Department.

Hahn says because of the ResQmax, he was able to save two lives on Sunday.

"The current was pushing them northeast. They just couldn't get back, they were completely exhausted, fighting to get back to shore," said Hahn.

Hahn says as soon as he got to Warren Dunes, he was able to help.

"I set it up and shot it to their left and it landed 6 feet from them. She was able to put it around her body and hold on to the tube the male was in," said Hahn.

The ResQmax shoots a flotation device that people can grab onto.

He and a couple of DNR rangers reeled the couple in to safety.

"There's a bunch of rope in this basket. Once the line goes out you can hold on to it and start pulling people back in," said Hahn.

Hahn says in the past, water rescues have always been major productions.

Hahn says the ResQmax is a game-changer.

"There were two incidents right on top of each other, there was a rescue at Warren Dunes and one at Weko. What this allowed me to do was save those two people and then direct all our focus to the 4 swimmers that were stranded at Weko Beach," said Hahn.

Choppy water conditions didn't keep anyone away Monday, but it did make some more cautious.

Hahn says it's a good idea to always be cautious.

"Just because we have this thing doesn't mean people should be going in the water on rough conditions. This just helps. It gives us a fighting chance to save lives," said Hahn.

If you are ever caught in a current, swim parallel to the shore until you are out of the current or rescuers arrive.