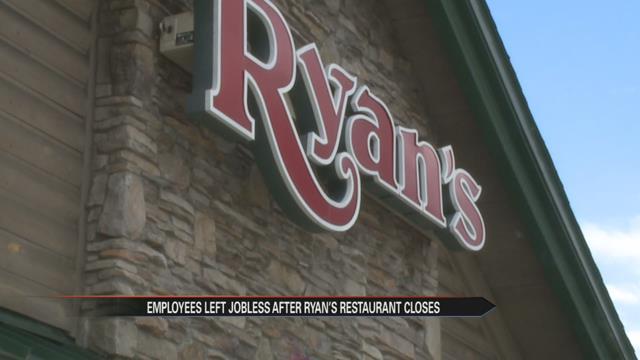 For some employees in Elkhart, they showed up to work on Sunday to find out they no longer had a job. Ryan's Restaurant on Emerson Drive abruptly closed without any prior notice to employees.

“It was a family. Everybody knew everybody. It’s sad to see this happen,” said Kristofer Wrathell-Denton who was a Server at the restaurant.

He along with 40 to 60 other employees were impacted because of the shut down. “A lot of those employees, it was their full-time job and to just be blindsided, even like a week or two weeks notice saying hey, we’re going under. Give us a heads up,” Wrathell-Denton added.

Employees showed up Sunday to find a sign on the door saying the store was closed until Tuesday for inventory. Now that sign is replaced with another sign that says they are closed for good.

“I got a message saying that we’re closed. A lot of the reactions were like mine, we’re shocked, we didn’t see this happening,” he added.

The shutdown is part of a nationwide closure of Ryan's restaurants prompted by the owner company Buffets LLC. More than 90 stores have folded due to bankruptcy proceedings.

Fortunately for Kristofer, he already had another job at M-3 and Associates, also in Elkhart. They are a factory type facility that makes RV parts. He said they are currently hiring people with prior factory experience.