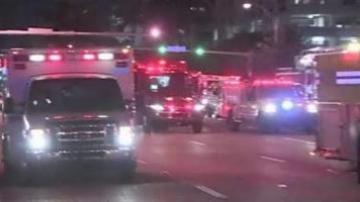 BISCAYNE BAY, Fla. — Dozens of people were injured after a deck at a South Florida bar and restaurant collapsed into Biscayne Bay on Thursday.

Emergency personnel said that 50 to 100 people were on the deck of Shuckers Bar and Grill when it collapsed.

The restaurant lost power, so a helicopter was used to light up the scene.

Officers say two dozen people were injured and three of those injuries were critical.

Investigators are still trying to figure out what caused the collapse.