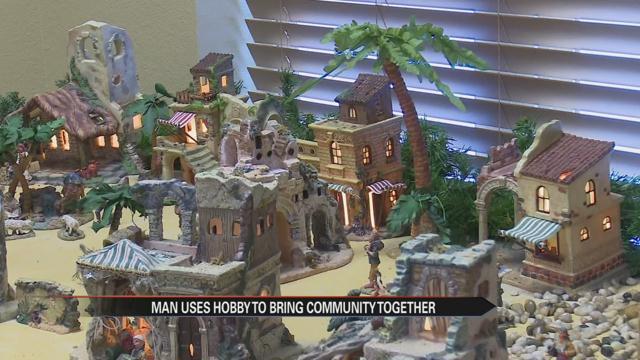 It's a hobby, and a lifestyle. One that's been passed on for generations.

Retired Air Force Colonel and former Notre Dame staffer, John Miles, is a self-proclaimed collector and woodworker. He began collecting buildings for a Bethlehem village 15 years ago.  And when the company stopped making them, he had an idea.

"I decided to develop the city myself," explains Miles. "Laid t out, added palm trees, dirt, and stones, to make it realistic."

Miles is spending this Christmas alone, unable to join his four children in Florida.

But he's found his own family at the Primrose Retirement Community. His way of giving back?

"It makes me feel good, I enjoy it," laughs Miles. "It's something that not only keeps me busy, but I do it a lot, I think, for other people who would like to see it."

He adds, "I've noticed that in a number of people who came to see it. They have the same sort of feeling."

Feelings of accomplishment and appreciation of hard work.

"To me it's almost like a therapy. After flying an airplane 2-3 days all over the world,  to come home, and you wanna relax," explains Miles. "To me, that was relaxation, doing something and making something other people could enjoy."

For him, it's about the people.

"I think the most important thing to me is the association with other people and the getting together," he adds."

But he wants his legacy of collections to live on.

"Because when I pass on, because it may not be too long in the future," he says. "I have to have homes for all of my various collection.

And as a holiday wish, a request of the community.

"That's what I'd like to have, everything settled where every collection is going to go," he says.