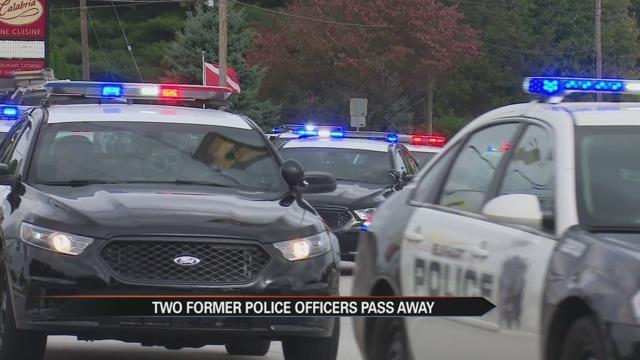 “I saw a lot of guys that looked like they had lost a friend honestly,” says Anthony Raeder of Bristol.

Anthony Raeder’s parents both worked as officers alongside Posthuma.

“We actually have a room on the back of our house that was built by him,” says Raeder.

Raeder went on to say that is how Posthuma was. He was always willing to help.

Posthuma had 26 years with the Elkhart Police Department, training officers and was part of the traffic unit as a motorcycle officer before retiring in 2011.

“It’s kind of terrible you spend all that time working your butt off trying to save everyone and when it’s finally time to take time for yourself you don’t get to spend a lot of time doing it,” says Raeder.

Raeder says as a son of two officers seeing all the police cars in procession for Posthuma reminded him of law enforcement unity.

“The past week has been pretty rough on us as a department,” says Sergeant Chris Snyder with the Elkhart Police.

Sergeant Snyder says when the department found out it was Michael Posthuma involved in this motorcycle accident they thought not again.

Snyder says both these men played a major role in training the officers on the force today.

“They both put in well over 20 years here and to think that’s the time you are going to get to relax and enjoy life a little and to have it end so tragically for both,” says Sergeant Snyder.

The officers also held a procession for Stewart earlier this week. His funeral will be Tuesday. Arrangements for Posthuma still have not been made.