Reverend under fire for anti-gay comments 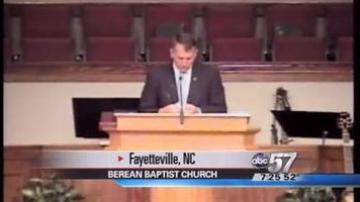 The pastor who sparked controversy around the country for his comment on gay children, was back in the pulpit, on Sunday.

Last week, Reverend Sean Harris, in North Carolina, told his congregation to punch children if they showed signs of homosexuality.

The Reverend encouraged fathers to "knock out" any gay behavior of their sons.

The comment was taken from a longer message, but Harris insists what he said was taken out of context.

Harris said, ""First and foremost, that was a vote for marriage sermon. It's being billed
as an anti-gay sermon, but that's a mischaracterization of the sermon."

Harris and his congregation have received backlash from all across the country.