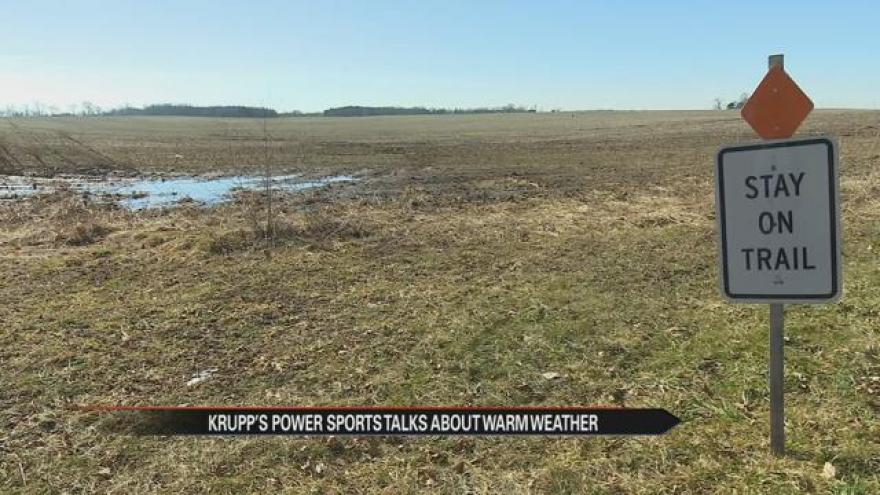 The sun is shining and temps are rising, but morale is falling for those who rely on snow to make a living in southwest Michigan.

“The early snow in December, nobody expected,” Mike Reichanadter said. “We had a lot of snow – it got people really excited. So we went through a lot of inventory just through the month of December.”

Reichanadter is the owner of Krupp’s Power Sports store on M-62 in Edwardsburg.

He and his team sold more than 60 snowmobiles through the first half of winter, but the sunny skies and soaring temperatures mean they now have to resort to their backup plan.

But snowmobiles are a staple at Krupp’s and in southwest Michigan.

One popular trail in Edwardsburg has been closed for weeks because of the weather.

Near the staging area for the Edwardsburg Snowmobile Club, the trail looks like a desert.

“It hurts the guys plowing snow,” Reichanadter said of the weather. “It hurts a lot of the restaurants around here that get tons of snowmobilers in the winter time. It definitely takes a toll on them.”

He added: “Anybody that has anything to do with snow certainly feels it. But around here, you just have to plan for it.”

It read, in part, “Don’t take risks by venturing on to any ice-covered waters to avoid dangerous situations that may end in tragedy.”

Places like Swiss Valley are still squeezing out some snowflakes.

Pictures of skiers enjoying some snow were sent to the ABC57 newsroom Friday morning.

But Mother Nature plays both friend and foe in southwest Michigan, especially for business owners and snow lovers.

Reichanadter said a lot of his customers travel north when there’s no snow here, but they always come back to Krupp’s for service, so business keeps up.