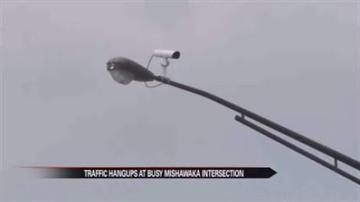 MISHAWAKA, Ind. -- Contruction at the intersection of Indian Ridge and Main Street is causing traffic delays.

Several drivers were running through the red light at the intersection of Main Street and Indian Ridge Wednesday.

A mother driving her daughters from Family Video said she had to honk her horn at a driver.

"I had to honk at one of them running the light! It's kind of a problem!" Sarah Corbin said.

Tim Williams of the Mishawaka police department said one of the largest reasons for wrecks in this community is because people run red lights.

Williams said "If it gets backed up too much it's going to block the next intersection, so that's probably one of the reasons they have the longer delay on the light changing here, like if they're going east and west."

Williams also said once the engineers get back in town, they will make sure the delay gets taken care of.

Williams said, "We want you to keep those emotions in check. We want you to stop for the red light because any of my officers working overtime aren't going to give you that break."

The light at this intersection is monitored by cameras placed on light fixtures. Williams thinks the engineering department made the lights longer to allow for better traffic flow.