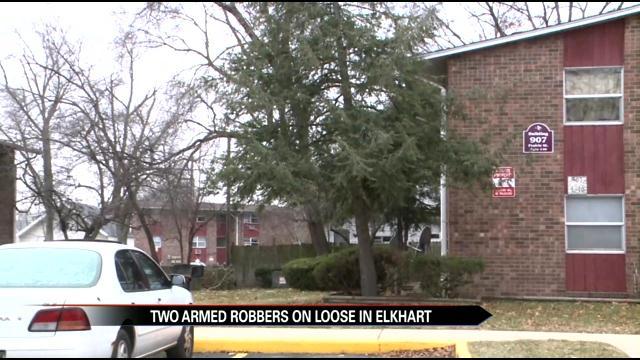 Elkhart Police were first called to the apartment complex on Prairie Street off Middlebury Street at around 11pm on Monday.

Greisy Arano Delfin, a young mother was washing clothes in the common laundry room of her apartment building. Two men entered the unlocked building and one of the suspects pointed a gun at Delfin and demanded money.

Delfin, barely being able to speak English, cried she did not have money on her and the only valuable she had was a pair of earrings. The thieves took the earrings and ran

About an hour later at a different building in the same complex Francisco Albarral, a resident of La Casa Estates was coming home from work. English is his second language and below is a translation of what he experienced.

“He was asking me for money and I had some quarters in my pocket and he said he didn't want that. He wanted my wallet. So when I tried to go inside I pulled the door closed and he got his arm in the door and fired his gun and luckily he didn't hit me,” says Albarral

Albarral is a two year resident of La Casa Estates. He said a masked man approached him with his gun drawn. Albarral says he struggled to open the front door and dodged a bullet that hit the frame.

He said he gave the man his wallet – which only had $15  in it. Even after this harrowing experience, Albarral says this isn't something that's the norm.

“I don't really feel unsafe living here because I know most of the people around here. I think it was people who don't live here because a majority of us who live here know each other,” says Albarral

In both incidents at La Casa Estates there were no injuries and no arrests have been made. Elkhart Police do not believe the two incidents were related. The victims gave two different descriptions of the suspects.

Delfin describes both suspects as black males, 17 to 20 years old, 5'10” to 6'0”, who weigh 150 to 160 pounds.  She says one suspect was wearing a white sweatshirt the other was wearing a dark sweatshirt.

Albarral says the man with the gun was wearing a mask but he could see some of his skin and would describe the male as African American or Hispanic, 19 to 20 years old, 5'9, and weighing about 185 pounds. He was wearing a tan jacket. He was unable to describe the other suspect.

If you have any information contact the Elkhart Police Department