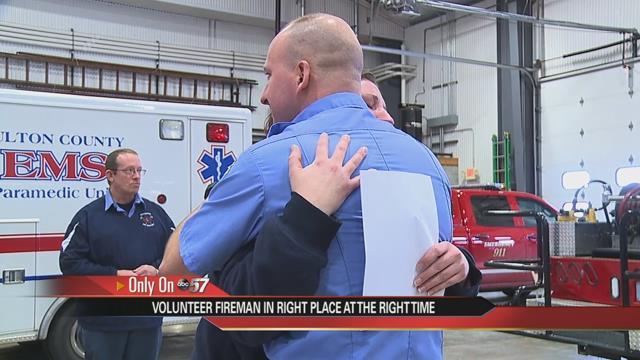 A local volunteer fireman’s bad luck helps save a family of six from a burning house.

Rochester Fire Department Volunteer fireman David Lawson said he was just doing what he was trained to do and hopes that anybody else would have done the same thing.

On January 19th, Lawson was sound asleep when he got a medical call at 1:14 A.M.

On his way back home, he ran into some complications.

“On the way back from the station I hit a deer out on 4th Street,” said Lawson.

He wasn’t injured and the car received minor damage to the fender and headlight.  The accident meant that he would arrive home later than he had planned.

“On my way back home I pulled back on to my road where I lived, I noticed smoke coming out of the vents of the house,” said Lawson. “I made contact with dispatch through my phone, I went up and started beating on the door and woke the residents up and got them out.”

Had Lawson not been on that street at that exact time, it’s possible that the family inside would have never woken up.

Heather Donnelly was one of the people inside of the house and she recalls the terrifying experience.

“We were asleep and we heard somebody knocking on our door very loudly,” said Donnelly. “ So my fiancé he went out there and basically was just like you guys need to get up your house is on fire.  So we scrambled around, grabbed the girls and got out the door.”

The family got out several minutes before the firefighters showed up to the burning house.

“We just watched our house burn not knowing what was going to happen,” Donnelly said.

The fire started in the attic and had been burning above the sleeping family for more than 30 minutes before Lawson showed up.

“I’m just really thankful for the people that were there that night and for the firefighter that stopped at our house,” said Donnelly tearfully.

Rochester Fire Department Chief Tom Butler says that investigators were called to the scene to determine the cause of the fire and says that it’s almost obvious it was electrical in nature.

If you would like to do donate to the family head to their GoFundMe.