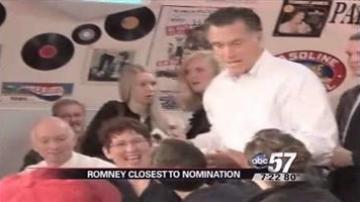 ILLINOIS-- After a double digit victory Tuesday, Mitt Romney is one step closer to The White House.

Wednesday morning, Romney got the endorsement of Florida Governor, Jeb Bush, and his campaign is dropping hints that it is time for his rivals to bow out.

Romney only needs 45 percent of the 1200 delegates to get the nomination, while Rick Santorum would need nearly 70 percent.

Romney said, "After years of too many apologies and not enough jobs, historic drops in income and historic highs in gas prices,it's time to say these words,this word: enough. we've had enough!"

Romney now has more than twice the number of delegates that Santorum has, but he still isn't even half-way to the number he needs to clinch the nomination.