Ronda Rousey returns to the Octagon. But for how long? 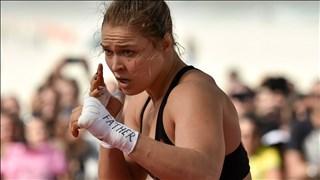 (CNN) -- Covered in blood, Ronda Rousey crumpled to the Octagon floor, knocked out from a kick to the neck.

It was November 2015 in Melbourne, Australia, and the previously undefeated Rousey was on the losing end of arguably the biggest upset in UFC history, succumbing to Holly Holm in UFC 193.

Dropping to 12-1-0, Rousey retreated from the sport.

On Friday, her 13-month hiatus will end when Rousey faces Amanda Nunes (13-4-0) at UFC 207 in Las Vegas with the women's bantamweight championship on the line.

The excitement is palpable: Rousey, one of the sport's biggest draws, is back.

But for how long?

'I need to stay alive'

After losing to Holm, Rousey, who was taken to a hospital, said she contemplated suicide.

"Honestly, my thought in the medical room, I was sitting in the corner and was like, 'What am I anymore if I'm not this?'" a tearful Rousey revealed in an interview with Ellen DeGeneres in February. "And I was literally sitting there thinking about killing myself. In that exact second, I'm like, 'I'm nothing. What do I do anymore? No one gives a s--- about me anymore without this.'"

Rousey said she isn't sure she would have made it through that low point without her boyfriend, UFC fighter Travis Browne.

"I looked up and I saw my man, Travis, was standing there," Rousey said. "I looked up at him and I was just like, 'I need to have his babies. I need to stay alive.'"

Since that loss, Rousey has been busy with other projects away from the Octagon.

She hosted "Saturday Night Live" on January 23. In February, Sports Illustrated made Rousey a cover model for its annual swimsuit issue. Rousey was in New York in April when Governor Andrew Cuomo signed a bill to legalize mixed martial arts. Later that month, Rousey reportedly signed a three-movie deal with Lifetime Network.

Now, though, Rousey has been mostly quiet ahead of her upcoming fight with the Brazilian Nunes, the reigning bantamweight champ. She's given few interviews and elected not to talk to the media this week.

"I think she was trying to do too much," UFC President Dana White said in a recent interview with CNN. "She was doing movies, working very hard for us too. She'd basically take on anything that came her way. And now she's just completely battening down the hatches, and she's focused on this fight.

"She already weighs 135 pounds. She won't have to cut any weight. She's in phenomenal shape, and she's mentally, physically and emotionally ready for this fight."

'Definitely one of my last fights'

Still, with everything else happening in her life, there is speculation that this could be Rousey's final bout, especially should she lose.

On Ellen's show again last month, Rousey hinted that retirement may not be that far away.

"Not that long, I'm wrapping it up," Rousey told DeGeneres. "This is definitely one of my last fights. Everyone better watch. The show isn't going to be around forever."

Before her loss to Holm, Rousey didn't just win. She completely dominated her opponents. In her run of 12 consecutive wins, some took less than a minute, such as when she took out Cat Zingano in just 14 seconds in February 2015.

Back then, Rousey, using her vicious "armbar" maneuver to neutralize opponents, looked unstoppable.

Will that version of Rousey, now, 29, will show up Friday?

"She was the most dominant woman on Earth for a very long time," White said. "She ran into Holly Holm and lost. She wants to come back and prove to everybody else she is the best, and she wants her world title back."