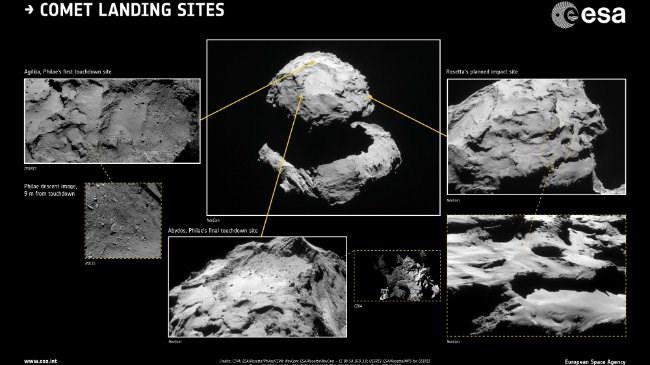 (CNN) -- The Rosetta space probe has crash-landed on the surface of a distant comet, ending a remarkable 12-year mission that made a series of breakthrough discoveries.

It was the final act of an epic project to chase a comet in its orbit around the sun, put a sister spacecraft on the surface and gather information about its behavior and chemical composition.

After confirmation that Rosetta had landed, the mission controllers sent out a simple tweet in many languages, just saying: "Mission complete."

Rosetta lander system engineer Laurence O'Rourke paid his own emotional tribute to the project, telling CNN it had been and "exceptional" mission.

"Sleep well Rosetta. You leave a legacy of science for generations to come," he said.

"To have seen the signal lost was a sad moment for all of us on the project and yet to have ended it in such an extraordinary way has made that moment also very special for us too.

"I was watching the images come down during the morning and each one was better than the last. The final ones taken were the cherry on the cake of this exceptional mission; they really showed the surface at amazing resolution."

The European Space Agency (ESA) which led the mission consortium, including NASA, decided that setting down the orbiter on Comet 67P/Churyumov--Gerasimenko was the best way to close the project.

Airbus Defence and Space, which built the Rosetta probe, said the impact was at a sedate walking pace of about one mile per hour.

O'Rourke earlier told CNN that Rosetta was too far away for its solar panels to be effective in running the heaters or the computers.

The orbiting spacecraft was not designed to land on the comet but by making a controlled descent and impact, it was thought possible to gather more pictures and data on the way down.

Scientists were keen to find out more about the curious lumpy structures they are calling "goosebumps" in the wall of pits on the surface of 67P.

They believe they may be the pieces that clumped together to form the comet when the solar system was young.

The Rosetta orbiter returned spectacular images when the comet made its closest approach to our star and tails of material were driven off.

And the landing craft Philae discovered 16 organic compounds including four that had never been detected on comets before the lander ran out of power. It was an important step because some of those chemicals form the building blocks for the ingredients of life.

One theory is that comets may have seeded the Earth with the necessary components for life to start.

Ahead of the last stage of the mission, astronomer Dan Brown, who lectures at Nottingham Trent University in the UK, told CNN that Rosetta had been an "astonishing" and inspirational venture.

"The presence of complex molecules, some of which were previously unknown to exist on comets, still allows comets to be a possible source of introducing complex molecules and enable the formation of life on Earth," he said.

Millions have followed the twists and turns of the mission through some of the social media interactions between the orbiter and lander.

Philae made a dramatic descent on to the comet's surface after its thruster and grappling harpoons designed to anchor it in the weak gravity failed and it bounced.

Mission controllers greeted it as a blessing as the lander was able to gather data from two sites.

Philae ended up trapped between a rock and a cliff and it was only very recently that the orbiter discovered its final resting place.

The spacecraft covered billions of miles to make its rendezvous with the comet and follow its trajectory around the sun.

Rosetta needed four gravity assists from Mars and the Earth -- the so-called slingshot effect -- to accelerate and meet its target. This circuitous route took 10 years and was so far away from a source of solar power that the craft had to be put in hibernation for part of the journey.

When Rosetta first arrived at 67P in August 2014 project scientist Matt Taylor told CNN that by following the comet on its journey they could see how it changed from its inert phase to when it was highly active as it approached the sun. As it got close, ice melted and turned it into an ionized gas tail and the dust produced a separate curving tail.

O'Rourke said the discoveries Rosetta has left a legacy that "will be there for many generations."