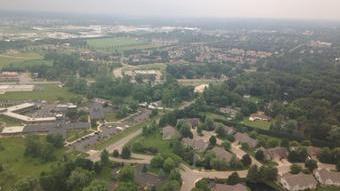 It is the largest helicopter show in the Midwest and it is happening right here in Michiana.

The 4th Annual Rotors ‘N Ribs Fly-In, in Goshen is welcoming all helicopter and rib enthusiasts for Saturday's big show at the Goshen Municipal Airport.

Pilots from all across the country will participate performances, reenactments and aerial demonstrations.

“We are so excited. Any time you can put together a helicopter air show of this magnitude and have it right here in Goshen Indiana, that's pretty neat,” said Goshen Airport Manager Randy Sharkey.

Sharkey said helicopter rides are just one of many exciting activities lined up for Saturday's fly-in.

It is a show that started as a way for helicopter enthusiasts to get together, but has grown into something much greater.

Those brave enough to take flight will learn the military history of their aircraft.

“We've met a lot of good people up here. They've supported us real well. And I think the people appreciate a chance to fly in a part of history,” Army Veteran Bruce Whitley said.

Whitley flew in from Atlanta.

He said it is his third year participating.

“I've probably done over 1000 rides in this aircraft and I've never had anyone get out and complain. They all say it was well worth it,” said Whitley.